I hated the title for that movie but somehow it (sadly) stuck in my head and now it's a title (with a minor change) for this post. Oh well it was either that or 'look what I ate in Iceland'. Anyway, on Thursday night I went out with a few new friends from Reykjavic (hello Birna and Inkor) for dinner at Einar Ben, one of the oldest (and best) restaurants in Reykjavik. The restaurant, housed in a historical wooden house that was once the home of Icelandic National hero and poet Einar Benediktsson, definitely left this hungry traveler well satisfied. I mean who wouldn't be after having a fantastic five course tasting menu that included minsk whale that was marinated with seaweed soya sauce (soya sauce made in-house from dried seaweed - who knew?), warm salted cod with arugula, rare beef with potato Lyonnais and a traditional Icelandic dessert of skyr (strained yoghurt with added cream and sugar) with blueberries and topped with a blueberry puree. God, that dessert alone was so damn good. All dishes were paired with wines by one of the best sommeliers in the country. What made this tasting menu different was that Chef was required to create meals that matched the wines, not the other way around. I mean again I ask who knew that a Spanish red wine would pair so well with salt cod after being taught that white wine is the best match for fish?? See this is what I'm talking about when it comes to great food. Take a look at the pics and tell me you aren't salivating… 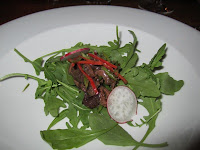 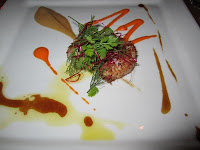 Grilled scallops with dill and cilantro – three sauces: roasted red pepper; garlic, and; caramel sauce which was quite sweet but very tasty with the scallops 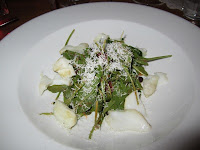 Warm salt cod with a parmesan arugula salad ( yeah, a bit of an arugula overkill but I love it so I won't complain). I should note that all ingredients for the dishes were locally sourced including the arugula (grown in giant greenhouses that are scattered across the country). 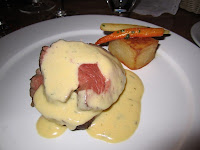 Rare beef in a béarnaise sauce with dauphinoise potato, glazed carrots and parsnips. 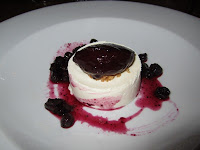 This was so damn tasty – skyr with a blueberry puree and blueberries!

Email ThisBlogThis!Share to TwitterShare to FacebookShare to Pinterest
Labels: Food talk, Iceland, Round The World