Alright, so I'm admitting that I ve been very, very bad lately about the blog. Totally neglected it but that's about to change starting now.

Ok so now that I'm about to say Auf Wiedersehen to Berlin, I thought I'd share a few thoughts about it.

What can I say about Berlin? Well not much since most of my visit was spent in bed and not in a good way. I wish I could say it was an adventure but truthfully it wasn't until the last two days of my time here did I really get a chance to explore and look around the city. And I took LOADS of pics so I think I more than made up for the lost time spent in my hotel room.

SO, if someone was to ask me my impressions of Berlin, I guess I'd say the following if these questions were asked:

Is it beautiful? Well it's a huge city with this indescribable energy you can feel when you're out and about. It also has an incredible history but beautiful? Not so much. Underneath the dirt, however, there is beauty but it's not Paris beautiful or even Munich beautiful.

Is it cool? Yes very much so. But I bet it's a cooler place to visit in the summer.

Are the people friendly? Yes. I can say with a resounding yes, they are. I mean I'm sure other people have had differing experiences but overall it was pleasant.

Am I happy to be leaving? Yes mostly because I'm tired and that little incident earlier on where I couldn't walk didn't help my mood.

What about the food? Yeah, wasn't really as exploratory as I thought I would be. Honestly I was just happy I had Weiner Schnitzel!

And as for pictures? Got plenty of those. For a taste, see below. 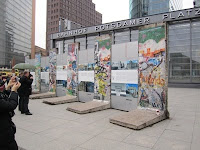 Exhibit of a few pieces of the Berlin Wall in Potsdamer Paltz – about 5 minutes from my hotel! 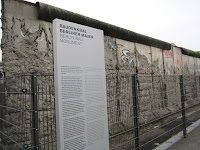 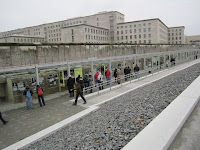 The Berlin Wall: very sombre but behind the wall is a beautiful museum dedicated to the history of the wall. 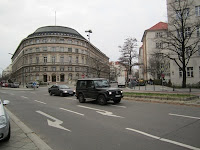 Schoneberg – a suburb of Berlin 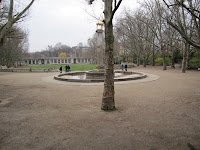 R. Wilde Park, Schoneberg. This is a beautiful park and the subway station is in the background! 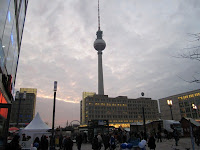 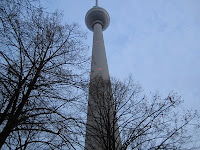 Alexanderplatz; The main square in Berlin. The tower featured in the pictures that bears a similar look to Toronto's CN Tower is called Fernsehturm TV Tower.

Email ThisBlogThis!Share to TwitterShare to FacebookShare to Pinterest
Labels: Germany, Round The World