I had a few hours to kill before I caught my plane to India, so I took advantage of the great weather in Rome and went out to take some pics. The hotel is like 10 minutes away from the Coliseum so I managed to get some pretty good shots of the place and the general area. I really was in a great area, it was a beautiful day and I really didn't feel like leaving... 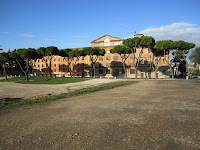 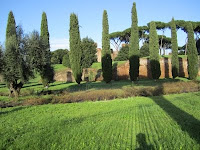 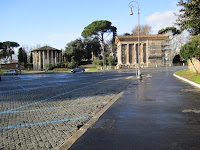 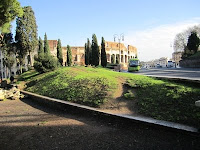 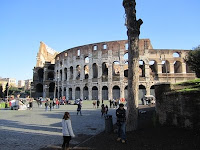 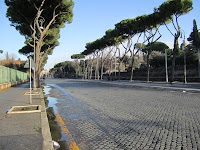 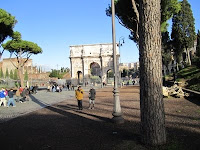 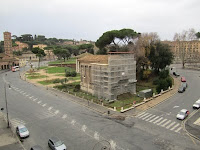 But leave I must so it's off to the airport. Now everyone pretty much knows that air travel is a necessary evil right? Right. Well thankfully my trip to Italy on Alitalia was uneventful.
When I say that, I mean that it wasn't as horrific a journey as you are led to believe - particularly if you read the endless, terrifying opinions about Alitalia on the internet. Mind you I flew business – so I guess the equation is the higher the class, the less complaints right? Or so you'd think - but I digress. When I got to Italy it was fine. The flight was fine, the food was surprisingly good and hooray, I made it safely. My bags? Nowhere to be found. Luggage was missing for about five other people too. Luckily after about two hours of waiting and discussions with helpful baggage officials, we all got our bags and a Merry Christmas was had by all. Awww, nice story eh? Not so fast. That it was Italy.
Now comes part two to this post.

Flying to India is fun. Yeah, actually not so much. Whether flying business or economy it is a long, long flight. I left Rome for India and flew with Royal Jordanian airlines. We first flew to Amman, Jordon (sidebar: have to say that airport is a little, change that, it's a LOT scary – WAY too many military people lurking about) before we changed planes and flew on to Dehli. That's where the trouble began. They put us on the plane no problem (quick question for anyone who can answer this: on the flight to India, why were there plainclothes men sitting up in front with the airline hostesses, as well as a few more special 'passengers' sitting in business and economy?? Hmmm).
Anyway, when we finally made it to Dehli it was foggy. I mean serious, dense can't see three inches in front of you fog. I said a small prayer as we landed (let me tell you that that was a VERY scary experience, one I do not wish to go through again) and when we did land we could barely see the landing strip or make out the airport terminal at all. But we made it. My bags did not. Neither did anyone else's. I'm like WTF is going on here? Not again - first Italy and now here too?? All I was thinking was" just breathe Steve, for your peace of mind". Fat lot of good that did :). Seems they put us on the plane in Jordan without a hitch, but decided, hey, why bother loading everyone's luggage too?! We didn't realize anything was wrong until an hour later and we're still standing there wondering where the f*ck are our bags, hating the passengers strolling away with their carry-on bags!!
A very harassed airport official then broke the news that no luggage will be coming – at all. Well if you could imagine pandemonium, then you'd feel right at home at the Delhi airport. People made a mad dash to the baggage claim area and let me tell you there were a LOT of angry people yelling at the staff! I wasn't angry - sort of. At first I really didn't care 'cause in my mind it was a great excuse to get some new clothes – that was until I realized like an idiot I packed all my meds in that suitcase instead of carrying it aboard like most smart travelers – THEN I panicked. I was getting tired and cranky after three hours of dealing with the baggage claim people. I was pissed off at India at that point and wished I stayed in Italy - of course I knew it wasn't India's fault, it was Jordan's but I was still pretty pissed!!!
Three days later after many calls from the incredible and very patient Miss Poojah at Shanti Home Hotel I got my suitcase. No apologies from the airlines though, no nothing! Nice. A great start to my trip to India eh? It didn't matter in the grand scheme of things. I was India now and boy were my eyes about to be shoved wide open!