Siem Reap was fantastic, and even better viewed from the back of a tuk tuk (auto r
rickshaw)!! These pics were taken on my way to the Angkor Wat Temple. 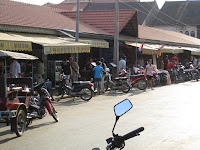 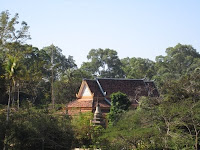 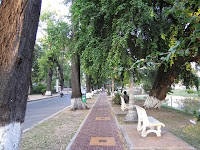 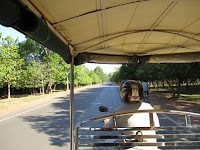 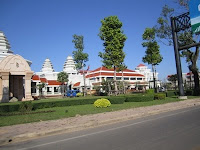 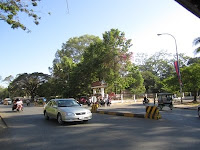 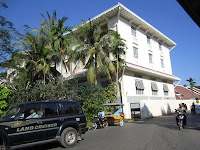 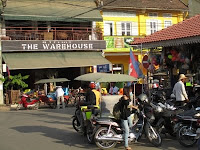 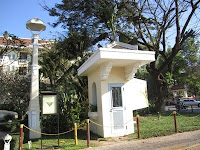 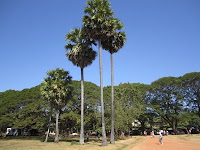 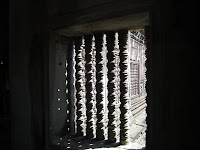 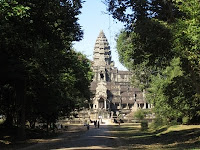 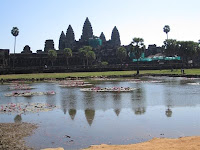 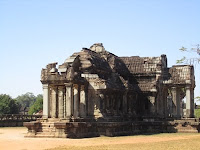 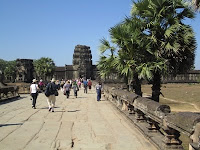 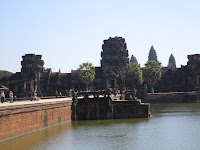 Now this is something I never do – post pics of my guides but I just had to do it for him since he loves Canada so much and I should add he really wanted his picture taken haha. Below is my guide Ratanak, who was extremely knowledgeable during the tour and very funny. I'm not sure if you should be laughing in such a solemn place but I was. 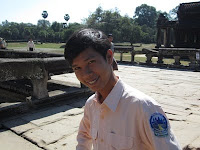 So after an afternoon walking about temples and such, a hungry man (and it must be admitted a hungover man thanks to the previous evening festivities of gin and relaxation) wanted some food. So I set out to eat at apparently one of the best places in Siem Reap for authentic Khmer/Cambodian cooking – the Khmer Kitchen Café. Now it seems the café is famous as the place Mick Jagger chose to eat when he was in Siem Reap. That did not impress me at all as a good enough reason to go there but apparently the cooking was worth it as it was recommended by the hotel, my tuk tuk driver and even my tax driver when I first arrived in Siem Reap. With all that praise you can't go wrong right? So I thought. Maybe I ordered the wrong things but I was a bit underwhelmed I must admit. I had rice dumplings and although they looked tasty they just weren't doing it for me at all. The texture was just to cold and doughy and the filling was non-existent – just shredded mint and cilantro leaves. Weird. Then I had a main course of Chicken Laab with rice. Laab, also known as Larb or Laap, is a northeastern food. It's usually eaten as a part of a set (laab, papaya salad and sticky rice.) but I just had rice with mine – I don't recall any of the other additions on the menu but whatever. The laab included string beans, slivers of cabbage, water spinach and Thai basil. There are different variations of lab; duck laab, shrimp lab but I had the chicken. My thoughts? Tasty but very dry. Thankfully I had a long Island Ice tea, something I never normally drink and more than likely won't again, to wash it down. I was told later on that I should have the pumpkin soup – yeah NOW ya tell me! Oh well. After a thoroughly underwhelming meal, I left, went back to the hotel for a very, very tasty martini(s) and relaxed under the warm night air. 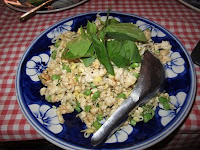 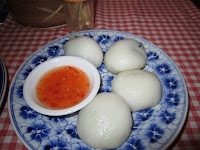 And finally it had to be showcased: the FCC Angkor Hotel – beautiful, lush, amazing. 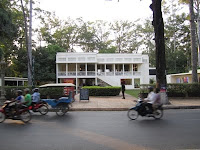 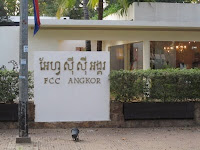 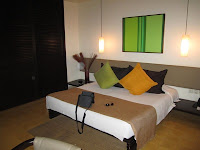 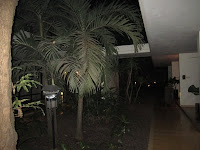 Email ThisBlogThis!Share to TwitterShare to FacebookShare to Pinterest
Labels: Cambodia, Food talk, Round The World