*when you can afford it. 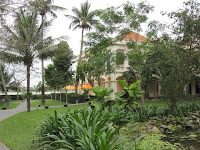 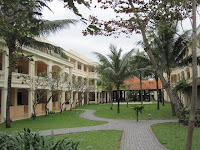 I recently left the hotel above called the Life Heritage Resort in Hoi An. A really beautiful place. But I was on my way to someplace special. You see, there are hotels in this great big world that are completely outside the realm of ordinary travel accommodation. I've never stayed at a five star resort before. That changed as of yesterday. This is the Nam Hai Hotel. 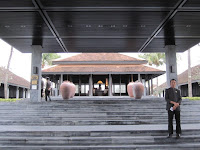 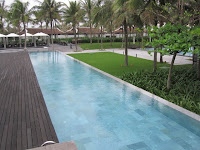 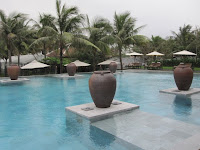 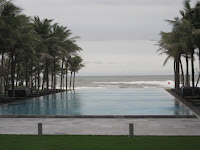 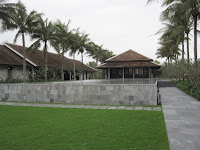 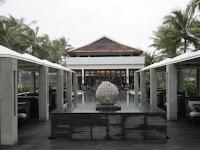 My bungalow faced the sea with a small lawn that eventually turned into a sandy stretch that reached the sea. Honestly I think the place was about the size of my old condo! 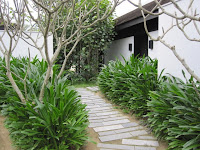 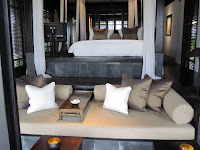 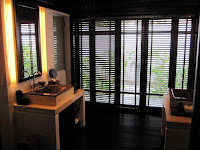 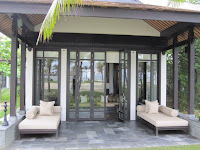 Oh but that's not the topper having a space as big as your former place.
As you're aware, this blog is called A Hungry Man Travels. When I arrived at the hotel, I was hungry and ordered a light lunch to my room. It was a Vietnamese sandwich called a Banh Mi (pronounced Me), with marinated chicken, cucumbers, pickled carrots, cilantro , mayo (surprisingly no pate in it - oh well), stuffed into a fresh baguette, and a glass of coke. A very tasty lunch order that shouldn't require too much fuss right? Wrong. What came to me bungalow was a reminder that I am a guest at The Nam Hai Resort, so you'd better believe it's going to be impressive. TWO people came to take care of my lunch order. Not only did they arrange the table, but I had to sit down so I could receive, in my room, the full restaurant treatment. You know what I'm talking about; napkin placed on lap, cutlery and stemware arranged just so. My simple coke poured into the glass, and it came with a small separate ice bucket in case I wanted more ice. Some people live this way every day. What can you do but smile 'cause lord knows you won't be getting that treatment at home unless it's your anniversary or you live in Buckingham Palace. I think this tops the Charlotte Hotel in London with the specially wrapped laundry – remember that?
So for dinner I sent a request to Chef to prepare a chicken curry dish, just for me. Big deal right? Well, it's not on the menu. I did feel sort of bad about asking him to make it, but I quickly got over it as there was a specialty Indian menu already in placce (just no chicken curry which I thought was odd) here at the hotel so it's not like I asked for the moon plus this is the type of place where just about any request is accommodated he doeth protest - way too much! Oh sidebar: I've never been called Mr. Wilson so many times in one place in my life! "How are you Mr. Wilson?" "Having a good day Mr. Wilson?" "Have a nice swim Mr. Wilson." "Another martini Mr. Wilson?". On the phone, by the pool, walking to the bungalow – it's scary how quickly you get used to it.
Anyway as I was saying, the Chef IS from India, and I know he knows how to make it and when I spoke with him after breakfast he said he'll make sure that the chicken would be marinating all day *wipes brow after writing all this out*. I mean c'mon right?? When am I going to get a chance like this again? To simply ask and though shall receive, guaranteed? I mean I've been to places where they told me I can't have breakfast in my room because it's easier for me – and the staff - to just come downstairs (that was in India and I still have to laugh at that). 'Tis all good – it's very, very good.
I could only afford to stay a few nights or it would blow my budget completely out of the water. Was it worth it? To me? Hell yes!! To others? Maybe not so much, but they have no idea what they are missing! Or maybe they do? All I know is that it's nice to spoil yourself a bit when you travel. It is so worth it. Still don't think so? That's ok, I'll live it up for you, and believe you me I'll have memories of this place pretty much forever.
said Steve at 10:37 AM