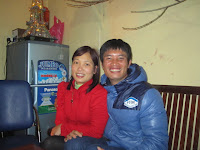 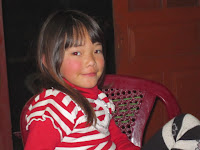 I wasn't sure what to think about the upcoming Tết Nguyên Đán, or just plain Tết (Vietnamese Lunar New Year) when I first arrived in the country three weeks ago. I didn't know what it stood for so I didn't know that I would end being very lucky to be in the country when they celebrated. It was fun and weird watching a country gear up for one of the biggest celebration of the year that we North Americans already celebrated about a month ago. People were buying kumquat trees, flowers and other decorations and preparing food. The streets were cleaned and loads of lights, flowers and posters were hung up - just a lot of hustle and bustle. Tết is a VERY big deal to the Vietnamese- a very big deal. Well wishers call at all hours of the day to say Chúc Mừng Nǎm Mới (and yes I do know how to pronounce that thank you very much – chuck myung nam moy -or Happy New Year) to friends and family! For the Vietnamese, it's a time for food and celebration. It is the time to put the past behind you, cast aside the troubles and unhappiness of the previous year and ring in a brand new year. And luck is a BIG deal at this time of year. For example I went on a hike yesterday in Sapa and bought this gorgeous tea set. The shop lady was so happy, so grateful because I was the first purchase for the store on the first day of Tết which meant that it would bring the store good luck and happiness for the rest of the year! I was like wow and all I wanted to do was just by this beautiful tea set and I had no idea the domino effect it would create. Made my day knowing that I had a part in that!

After the hike (8 kms – not bad, got a taste of what's to come in Australia) my guide Son invited me to his house for dinner with his wife and kids and I was just blown away by the invitation. Then I got scared. After he dropped me off you should have seen me running around Sapa looking for gifts to bring to the house, all according to Vietnamese tradition. Then rushing back to the hotel to go online and catch up on Vietnamese etiquette. Holy Mother after reading various blogs on the subject I was terrified to even eat let alone touch anything, blink or move my feet!!! Turns out the nervousness was all for nothing. My guide was totally relaxed as was his wife and although he appreciated the efforts he just smiled, shook his head and told me to relax haha. I'm still glad I checked things out though. He also got a good laugh at me because I wrote out all the right things to say in Vietnamese and the proper manners at the table on a little cheat sheet so I wouldn't mess things up! I know its nuts but I'm like that – he probably thinks so too but hey the family liked me enough to ask me to a party tonight! I politely declined that invite but I did thank him over and over again for the dinner invite!

I haven't forgotten the food. 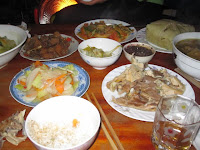 So from the picture (not one of my better shot) we had: Pickled carrots and shredded cabbage (front row left); pickled onion bulb with chili for heat (middle row centre) – a special side dish only served at Tết; roast chicken (front row right); sweet and sour pork with bone (back row left); sliced cooked potato and tomato (absolutely delicious - back row centre); there were two soups made from ox bone: one with mushroom (far right and almost out of the picture frame) and one with vegetables and a lovely coconut flavour (far left and almost out of the picture – again sorry for that); Banh Chung - sticky rice shaped into a square cake and stuffed with mung bean paste and pieces of pork (far back right corner); Rice (white bowl at the front - left) ; all accompanied by a very tasty glass of whiskey (glass on the right)! what wasn't shown was the Chả lụa, made from ground pork and potato starch which is sliced n and served cold - very tasty but you also know that that particular dish is an acquired taste! The food was just so damn good that I ate too much which Vietnamese Hostesses love as it shows appreciation for the food but I swear this country is very going to make me fat which is ironic because everyone here is so thin and they are eating the same thing I am!!! Sons wife did the majority of the cooking with Son assisting. I was just again blown away, completely overwhelmed by their generosity. I was saying to a friend recently in an email and I ve said it on this blog that travelling alone can be a lonely thing so you jump at the chance for live conversation and good food with other people.

So I wanted to let you know, based on quick research, a few tips should this happen to you if you're invited to a Vietnamese home and youre unsure of etiquette. You can bring fruit (when buying fruit keep in mind that certain numbers can either bring good or bad luck to the household so check before you purchase), sweets or something for the house like candles or pictures frames. Gifts should be wrapped but heaven help you if it's wrapped in black or white – should be either red or pink. No flowers for the hostess unless you happen to be her husband. Spirits and wines are good to bring, particularly whiskey. I gave money to the kids, about 20,000 dong per child - not loads but that's what I was told and it's more than enough for a seven year old and a five year old as well as a baby to buy sweets (he had three kids)! Anyway a great evening and nice way to celebrate Tết. Cám ơn Son and Family!