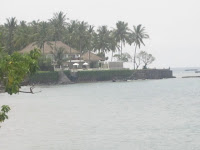 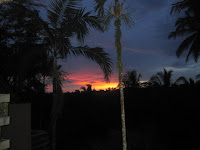 So I've been in Indonesia now for about what, two weeks? Since my trip to see the Orangutans in Borneo (which believe me was a trek in itself; it took three separate airplane trips just to get there and another three back but it was completely and utterly worth it!!), I've stayed in areas of Bali both in and outside the main touristy spots – specifically in the towns of Ubud and Mangiss (special hello to Ian and Lydia – fantastic couple from the UK who I had the pleasure to befriend and spend time with at both places). Mangiss is near the ocean which is a draw in itself! Here's the deal with Ubud. It is supposed to be the spiritual and artistic centre of Bali. It's where you go to find yourself or buy some amazing art - something like that. I wasn't feeling the spiritual thing but I sure did see a lot of tacky stores with so much crap/junk that substitutes as souvenirs/art, whatever they want to call it, geared to tourists but what can you do? The market has spoken so the locals are giving what is being asked for. Sad and depressing. The good news is that it totally put me off shopping which is a VERY good thing. 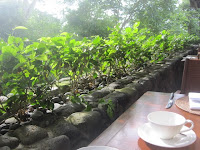 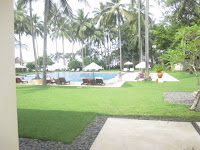 A little story about my stay in Mangiss. This past weekend was a national holiday called Nyepi, which is a Hindu celebration to mark the New Year. Basically, it's a full 24 hour day and night of contemplation, so the entire Island is shut down and silent including the airport, so if you had to catch a plane that day you were shit outta luck! No traffic; no TV; no loud or any music blaring; no stores, restaurants or cafes open - I think you're getting the picture. No noise at all. So those of us staying at the resort (actually, ANY resort) were not allowed to leave it under any circumstances, barring a medical emergency. It was odd but kinda nice too. At night the lights were turned off (required again to observe the holiday save for a few lights here and there so guests don't kill themselves trying to get to their rooms,)and it was actually quite beautiful to see the stars. Mind you it was anything BUT quiet at the resort thanks to an influx of families and children whose nannies or housekeepers had the day/weekend off to observe the day of quiet. Thank God I escaped the place the following day! 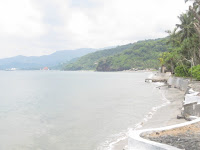 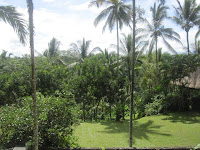 Next stop was Seminyak; apparently THE place to be in Bali. I believe it – designer stores; flashy restaurants; hip little cafes. Very nice indeed!! After a couple of days there I move on to Jimbaran (another hot spot) where my family is flying in from Canada to stay with me for two weeks. I'm very excited about that - I haven't seen them in months!!!

So you wanna know how lazy you can get here in Bali – body AND mind? Well today I was lounging around as you do, nursing a slight hangover thanks to a very tasty dinner and drinks at Ultimo restaurant the night before, totally in sluggish mode when reception called to ask if I was ready to have the porter collect my bags. I'm like what? What are you talking about collect my bags? Check-out isn't until tomorrow! Oops not so fast Stevie – my reservation was until today, not tomorrow. If you could have seen me running around, sweating like crazy as it was hot in the villa (I stupidly turned off the air/con), frantically throwing things in bags (it was 12:30 – check out is at 12). Maybe I can't blame Bali and the heat. Maybe it's just me being forgetful – hmm, concerning…

After that lovely moment (correction: it was stupid Steve, a stupid moment), as I was being driven to Jimbaran I was asking myself where the bloody hell did the time go?? I mean it has been somewhat busy with activities but not nearly the level it was before I came to Bali so what gives? Well, I'm thinking it's just pure laziness on my part and I guess doing nothing makes the time go by faster? Hey that's my theory and I'm sticking to it. Ya know staying at tropical resorts never used to be my thing but now? Oh, I can sure get used to this life. The weather is just so nice; you have an incredible staff around you to pamper you, so as a result I fallen into the trap of one of the seven deadly sins - sloth. I just don't want to do a thing – wait that's not true. I want to lounge around or swim or just sit on the beach and enjoy the sun and warmth. I don't want to do walking tours, hell I don't even want to walk! Case in point; I went to this gourmet food store in Seminyak to get a sandwich for lunch the other day and was so grossly sweating by the time I got there (only ten minutes from my villa too!) I vowed not to do that again, at least not during the day when the heat is at its zenith. Yeah like I'm going to do it at night- who's fooling who here?

Here's why I couldn't be motivated to do anything. Look at it, my own private pool!! So you tell me - would you want to leave it to go walking about in +30 degree weather??? 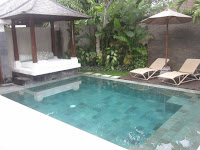 Next up: Balinese Cooking!
said Steve at 2:59 AM

Email ThisBlogThis!Share to TwitterShare to FacebookShare to Pinterest
Labels: Bali, Indonesia, Round The World