The Final Stop: A San Francisco state of mind 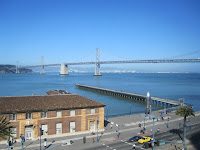 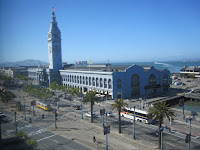 The view from my hotel room – San Francisco 2011

Before I ramble about my visit to San Fran (SF) and conclude my travels for 2011 (wow, that seems sad in retrospect now that I’ve written it down), I just want to get a story off my chest.
Now this blog has (mostly) been about eating and adventures. Everything written has been (mostly) positive because this trip is/was so amazing, and I was very lucky to have gone around the world without much incident. Rarely have I mentioned the other side of travelling - meaning the unpleasant bu necessary part of having to go though so many different airports and their varying degrees of customs, security and general crap, exacerbated when your travelling on your own.
The blog also includes the many people I’ve come in contact with on this trip, both positive AND negative (rare) experiences. The interactions with people are usually the most amusing, to me anyway, and I've had a few interesting ones including the rather snarky lady on my flight to New Zealand who informed her husband as he stared at my Kindle “he only has a Kindle honey; it’s nothing to get excited about.” This was said in a rather snotty, dismissive tone. I’m thinking "What? Well I certainly don’t see YOU with one so go sit yourself down back in coach!" Yeah, I know, not the most mature handling of the situation, but I’m human so it’s excused – this time. Besides, it was what I was thinking. I didn't say it out loud and besides, it’s an eight hour flight; did I really want to get into a pissing match with someone I don’t even know over a Kindle?
One incident, however, stood out for me the most, and that was when I flew Virgin Airlines to get to San Francisco via LAX. Now I like Virgin, and the business class section is very nice indeed, and since I was on my way to San Fran it had a disproportionate number of gays on the flight. Now gay people as a rule are amazing (being gay myself I should know haha), but like most groups, when too many are clustered together it can sometimes get a bit, well – testy (no pun intended). So I get on the plane, find my seat and inadvertently blocked this guy from getting to his seat as I was hoisting my heavy bag into the cabin bin above. As I struggled with the bag, I was VERY rudely informed I was blocking his seat. Violence is not my thing but if anyone deserved a good smack across the face it was this sunglass wearing (yes he was wearing them on the plane) smug, fashion -victim bitch. I of course apologize for blocking his highnesses' way, and proceed to inform him that I would be out of his way in a minute. I guess a minute was too long as he exhaled noisily in that impatient way people can be right? So what do I do in response? I move slower. I ever so carefully took my time to stuff my bag into the bin, then slowly moved to my seat and took out my Kindle (sidebar: Amazon really should pay me for the amount of plugging I’m doing for the Kindle!). Thought the story was over? Nope. Oh I do love Karma because he got his later when he was told by the flight attendant he was sitting in the wrong seat and had to move not once but twice – HA!! Oh, how I loved it as he grumpily moved his belongings not once but twice. Justice is awesome sometimes eh?

OK, digression over and back to the post at hand which is San Francisco! 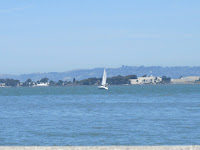 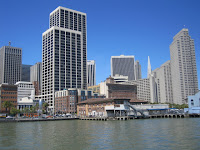 Now it must be said that this was my first visit, and I absolutely love the city! No, not for stereotypical reasons (it is not for nothing SF is known as a gay Mecca) but for very simple reasons: it is a beautiful city; the weather was perfect, and the people are very friendly. It has areas that take your breath away – both in a good and bad way. Good as in the aforementioned beauty of the city, bad because there are sketchy areas; seriously sketchy areas, and just plain alarming areas. You’re taking it in thinking, "Wow, these sketchy parts are so very close to the nicer parts, yet no one seems to care." An uncomfortable relationship I’m sure, but hey ho if no one else seems to get all uptight about it, no reason I should either. 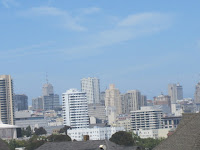 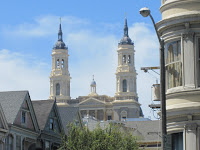 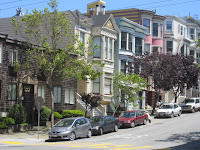 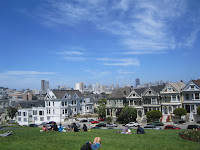 I was very lucky to have met up some with some great friends which made the time there even better (thanks and shout-outs to John and Tim). Unlike LA, I actually did leave the confines of my beautiful hotel and walked around the city, with John acting as my unofficial guide for the first two days and Tim taking over on my third day. I really got the chance to explore the city, and I was all over the place! Visted City Hall, The Museum of Modern Art, hell - I even contemplated taking the trolley but the lines were just too long. I even walked around the overly-touristy fisherman wharf district, and really wanted to go to Alcatraz but again crowds prevented that from happening. At night, John, knowing my love for dive bars, took me to the Tenderloin district which apparently isn’t very safe, but I honestly wasn’t alarmed or even noticed that we were in one of the most notorious and dangerous parts of the city. Hey, it was so worth the possibly of being mugged because there are some seriously fantastic dive bars around there! The next day I met up with Tim and we made our way to Buena Vista Park in Haight-Ashbury which was a very tough hike uphill, maybe not so much for those who are in great shape! We walked over to The Castro, had dinner, then made our way over to the Toranado bar (I think I was on a dive bar tour in SF). I found the place while "researching" places to have a drink, and convinced Tim to check it out. Well he loved it as much as I did. Honestly, the Toronado was just awesome, probably one of the best pubs I've ever been to. Believe me the place is nothing to look at, but the incredible selection of beers, the atmosphere and the fact that right next door serves perhaps the best sausages on a bun ever, helps make this one unforgettable establishment!).

So yup, I really did leave my heart in San Francisco. I can hear the groaning there and yeah, yeah, cliché but it’s true! SF is yet another addition to my list of “I’ll be back again” places if just to go back to the Toranado!

Email ThisBlogThis!Share to TwitterShare to FacebookShare to Pinterest
Labels: California, Round The World