Veggie Lasagne with a side of THG 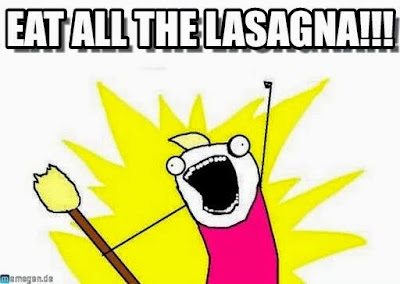 image courtesy of www.troll.me
Oh lasagne, you fattening, high carb, sloppy, messy, awesomely tasty dish. Where would we be without you in our lives? It's tasty origins began in Naples, Italy, but it has become a regular part of our North American food language. It's right up there with cake and pizza. But the best thing about lasagne, is it's recipe versatility.
There are so many different versions of this dish - particularly online, that it's overwhelming. Despite the recipe overabundance, I have to yet to taste a lasagne dish that did not push all the right food buttons.
All those noodles, smothered in a rich tomato sauce, loaded with ground meat and various cheeses. All good. All very, very good. You're thinking about it now, aren't you. You can literally feel your stomach pushing hard against the Spanx right? Now imagine that same dish with a meat substitute. Did you grab your heart or shrug with indifference?
I grabbed my heart it must be told, because my cooking brain is still sadly stuck in 'meatville'. Realizing there are actual tasty - and please let me emphasize the word 'tasty', meat substitutes that are not only worth talking about but can also make a veggie lasagna recipe pop? Well, I'm still shocked. I shouldn't be, but I am.
Now I know that I'm guilty of making a few, under the cuff, comments about vegetarians and vegans, but it must be said it was and still is done in jest. It's all in the name of good fun. Vegans and vegetarians are sometimes a tiny bit overzealous about their beliefs, thus making them ripe for parody that it can't be helped.
Despite the jokes, truth be told there are some tasty vegetarian recipes floating around out there. Give me Dhal and Id die a happy man. But I'll bet you might be wondering what's with all the current vegetarian love from a blog that rarely, if ever, steps down off the pro meat ledge?
The answer is simple, and we'll call him THG. It doesn't matter what the acronym stands for, but needless to say, he has become surprising and quick influence on this hungry man, and will no doubt be popping up in future articles and postings. It was THG who told me about a meat substitute he uses for his lasagne recipe. I was incredulous as I often am whenever the words 'meat substitute' pops up in a conversation. But you see friendly readers, I may have been wrong to do that.
The product below was the meat substitute I recently tried: 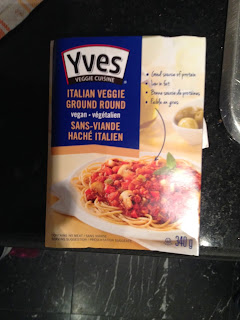 image courtesy of Stephen Wilson
I am putting my hand on my heart and truthfully stating that I ate this product on my own volition. I know I can be such a pain in the ass when it comes to food. If I happened to see something like this product in the grocery, I would immediately walk past it. My proud food brain denying the fact that anything that claims to be something it isn't (A meat substitute you claim? Pshaw), doesn't deserve to be noticed. I really must be more careful about that now and in the future.
When added to the tomato sauce, it was actually quite tasty. Same texture, same taste, you would barely even notice it wasn't meat but an actual meat substitute. Now keep in mind that a significant portion of the flavour may have been buried in the sauce that THG created, but I did taste a piece of it on its own, and I can't think of a single thing to criticize other than the usual and ubiquitous voice in my head yelling "but it's not meat!"
And at the end of all this, guess who decided to visit me today? Miss Irony, that's who. With all this talk of substitute meat, my lovely friend Hannah W. just notified me that my order of steaks and ground meat from her family farm is on it's way to my kitchen.
Ah well, sit back and let your eyes do the eating. This is THGs Lasagne, pre and post-baked. 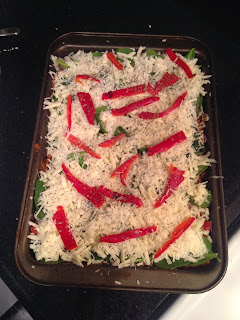 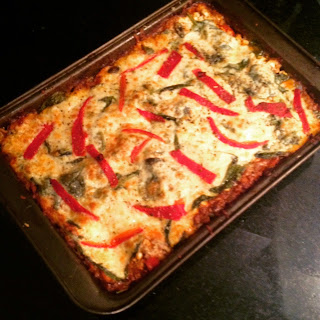 image courtesy of Stephen Wilson
Looks good doesn't it.
If you like what you see, please email me and I'll be happy to provide his recipe!