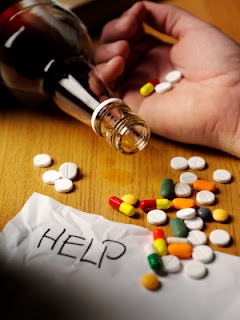 image courtesy of verticalengine.com
"You stupid idiot, watch what you're f*cking doing!"
Pretty harsh wouldn't you say? Well you can bet that those words, or something close to it, might be hurled at you if you work in a kitchen or in the front of the house by an irate Chef, or staff member or even a patron. Gordon Ramsay may be an insurmountable, detestable pr*ck on TV, but the intense, pressure cooker atmosphere of the food world once portrayed on his program, is pretty close and as real as it gets. It can shake you and break you down, and for some, the only way to cope is to turn to drugs or alcohol. This is just one of the many dark prices often paid when you work in the food industry.
The light shines on professionals who have battled their way up the ranks to become beacons of food trust. We all look at them and we instantly know who they are. We know that they are culinary experts. Basically, we know that they know their sh*t. An example? Anthony Bourdain, who continues to have growing public name recognition. Another example? Alain Ducasse, a food pioneer and superstar within the food profession. Countless hours have been spent polishing, learning, honing, starting from scratch again and again, correcting and following up on their mistakes so they could become the voice of an increasingly aware world food order. These accomplishments, achievements, and yes, even setbacks is not a joke, nor should it ever be taken lightly.
But it's the less celebrated side of the food business that needs to be examined, discussed, even scrutinized. A side that involves the dirty, messy and punishing aspects of the industry. What about the soul-tearing side of an industry that was portrayed on Ramsay's show to a greedy, bloodthirsty TV audience for ratings purposes, but is often a very real reality for thousands of food industry workers? Or worse, the drugs and alcohol abuse, the broken marriages and relationships that happen in far greater frequency within the food world than most would care to admit? Talking about these darker issues isn't encouraged, particularly since food has attained this glossy, glorified, glamourous image. But, maybe it's time to take a chisel and hammer away at the lacquered veneer of an industry that will happily eat you up, and coldly spit you out.
According to the National Council on Alcohol and Drug Dependance (NCADD), out of the millions who hold full time employment, approximately fifteen million are heavy drinkers. The NCADD noted that heavy drinking is particularly prevalent in the food industry. Another report, by the Maryland USA Work substance use and workplace policies and programs, combined national employee drug use data from 2002 to 2004, and found the food services industry was reported to have 16.9% of current illicit drug users among full-time workers, aged 18 to 64. This number places food industry workers at the very top of all industries for illicit drug use. This should not come as a surprise to anyone, whom has either been, or is currently employed in the food service business. The statistics for personal relationships within the food industry are no better. In 2000, Statistisa - an American statistics organization, compiled a list of the top fifteen occupations with highest divorce rates. Can you guess which industry made the top ten?
Working in the restaurant trade is not for everyone. Like most professions, it can be hard on the body, mind and soles of your feet. You have people yelling at you, berating you and the constant pressure to keep up and ahead of the work is relentless. It can also be rewarding, thanks in part to that same hard work ethic. But the aftermath of serious alcohol and drugs problems in this business, has resulted in the closures of restaurants and bars, damage to reputations, financial ruin and the disappearance of some top notch talent, as well as thousands of unknown yet hardworking restaurant workers. The turnover rate is extremely high in the food industry, and there is no doubt that alcohol and drugs have played a part in the turnover. That, along with very poor pay - which is another issue that tarnishes the successful food business coin. Alcohol and drug rehabilitation is available, and has worked for some including the aforementioned Anthony Bourdain, who kicked a heroin habit. But, there is the very real question asking whom can afford rehab when you're struggling to earn extra tips on a salary that pays 10 dollars an hour - if you're lucky?
It's been said so many times that if you can't stand the heat, get out of the kitchen. There's truth to this, particularly with statistics that back up an industry problem where falling off the wagon is about as common as finding a Tim Hortons franchise. Perhaps it's wise advice to consider, particularly for those who may have the dreams, but not the stomach or strength to handle the dark realities of a brightly lit food world.
said Steve at 9:53 AM