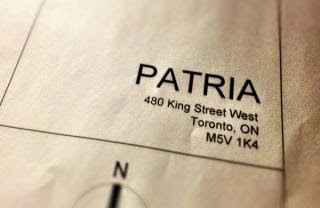 image courtesy of notable.ca
Since Patria features Spanish cuisine, I was planning to start this review with a cheeky little phrase in Spanish. I failed because I didn't want to write something so pedestrian as 'Olé', so I chose nothing. Instead of focusing on Spanish words and phrases, how about I focus on what matters - the incredible Spanish dishes from which I received more than a mouthful at the fantastic Patria restaurant in downtown Toronto.
One of the things I enjoy the most when dining out, is looking around the room. I like to (discreetly) watch people, just to get a sense of whether the restaurant has achieved it's design/ambience goal. Is it a place of quiet conversation and reflection while dining? Lets take a glance at the patrons to see if that's what they're doing. Is it designed to be loud, raucous with a party atmosphere? Again, if the people are laughing it up and drinking their faces off, design/ambience point has been made.
So what to say about Patria? Well, it's big, it's loud and its unapologetic when it comes to its focus on Spanish cuisine. Believe me, it's a very good thing. This room was designed for people to have a good time. Although our reservations were early in the evening and the room was quiet, by the time we left, it was clear the restaurant achieved its goal because the place was absolutely heaving with happy, laughing and yes, loud, people on a Monday(!)night.
I also had no idea that Patria was such a big celebrity haunt too, but there you go. Frankly, I could care less if some character from Harry Potter was photographed at the restaurant. I'm not there to find out what they ate, I'm visiting to get my fill of cuisine Espagnole.
I'm going to take a moment to personally focus on Patria wait staffer, Scott - who took care of us of on our dining night. You see, it's one thing for a server to familiarize themselves with their table, that's the job of any and all waitstaff. But it takes an experienced waiter with a very keen eye, to recognize the people at the table, size them up and figure out what it will take to ensure and potentially elevate a patrons dining experience. And of course, it doesn't hurt to know that an increase in dining pleasure may result with an increase in tip potential. Did you know that a great deal of psychology goes into waiting tables? Now you do.
Scott had us figured out. After explaining the contents on what we all agreed was rather a long menu, he asked if we would be interested in just letting the kitchen do their thing. Chef will bring a variety of plates for us to sample. As the menu already indicated, the food at Patria is meant for sharing, so my dinner companions and I agreed to forgo a menu and bring a variety of plates to the table. I love it when you can just be free of the menu sometimes, because there is nothing worse than scanning a menu over and over again, trying to decide what will be good, what won't work, and figuring out what you, let alone everyone else, wants to eat and drink. He did the job for us, so thank you Scott.
And he took care of us. What arrived were a Selecion de Embutidos - or a house chacuterie platter, featuring Serrano ham -and I can see why we salivate so much over this ham and beg for more. It was thinly sliced so that it just melts in your mouth. The dish also came with Ibérico chorizo, fresh bread, and prosciutto. Delicious. We had Croquetas de Jamon, which is a traditional Spanish ham croquettes, with aioli and béchamel sauce. Next was Pimentos Rellenos de Buey , or piquillo peppers, oxtail and manchego cheese. And our final dish was Dátiles Con Tocino Ibérico, or dates and Ibérico Bacon, Manchego Cheese and Guindilla Peppers. God, the bacon alone made my mouth water.
Unfortunately, because there were three of us, we couldn't order the house speciality - paella Patria.The paella, made with Bay scallops, shrimp, mussels, monkfish, cuttlefish, snap peas and saffron was just calling our names. But it just wasn't meant to be. It was explained to us that the dish would feed about eight people, so we just didn't have the numbers nor the clout to warrant Chef to create a smaller version for the three of us. Still, I do wish we could have had a small sample of it.
Would I go back? I think yes, but probably with a loud, raucous group, rather than with a partner. It just seems to be that sort of place. The food and service would definitely draw me back the most, the environment however may deter me just a bit as it can be quite loud. Big groups celebrating a promotion (a huge promotion I'll add - if you're covering the cost, you'd better bring the platinum Visa), or whatever people celebrate in big groups - and celebrate loudly, this is the place to go. Excellent service will definitely make it a memorable night.
A quiet, romantic dinner for two? Maybe not. But a fun, loud and yes possibly drunk evening for two will definitely work at Patria.
said Steve at 9:50 AM