Tragedy in Orlando: Strength and Solidarity 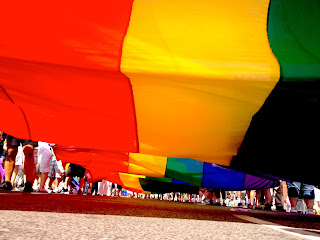 image by Stephen Wilson
A madman decided that the lives of the LGBTQ2 community in Orlando, some of whom were out on a Saturday night enjoying life on their own terms, should die because of who they are. Someone woke up and decided - that day, that night, that they simply weren't fit to live on this planet, breathing the same air as him. Someone - and he will not be named in this post, made that terrible decision and stuck by it with deadly resolve. This wretched, twisted, sad excuse of a human being, killed and injured people celebrating life in their own space, in the sanctity of their own world. These men and women were not in a public space, they were safe in their world with others just like them. I should rephrase that last paragraph and say that they were 'supposed' to be safe in their world. He took away that safety. As a member of the LGBTQ2 community, you look for that space, you crave that space, that shelter from a (very) hostile world. To be free, with others just like you. The gunman massacred these men and women, and took that safe shelter away from them and so many others.
Thoughts and prayers are not enough. There are not enough words, gestures and actions to help understand just how awful, how horrific this incredibly selfish, evil act of pure, unadulterated hate is, particularly to the LGBTQ2 community. The emotional and physical damage the outcome of this act will do to the community, to families and friends, the shockwaves as it reverberates around the globe, is overwhelming. But it is a reminder that for every victory we in the LGBTQ2 community make in the world, for every step forward we take, there are people who are just as determined, just as vigilant to see that we are pushed back, that want to see us die for who we are, who we fight to be, every single day of our lives.
I am saddened and absolutely heartbroken at the loss of life of my LGBTQ2 brothers and sisters. But for me, I won't be cowed or made to feel afraid to be who I am. He won't win because we are strong, I am strong, and made stronger by the show of love and solidarity both within and outside the community.
said Steve at 5:01 PM