So I realized I've been rambling on about, well, everything: scams, loneliness and yadda yadda yadda and yes that is all VERY important stuff that I wanted to get off my chest but I'm missing the point (again) of this blog and I was directed back to it today. Food!!

Before I do, I have to say that I had a great day today. Went on a tour of the city with the best driver I've ever had – he was so happy it was infectious even when the following happened. Got in a car accident (minor fender bender) when another car hit the car I was in. Met an amazing couple from New Yawk during a pint at Finnegans (Paul and Atina – thanks for the beers and conversation!!). And something else. The whole reason I'm in Viet Nam and today I did it. Bourdain would be proud - well maybe he wouldn't care but I'm damn proud! I went and got myself some street food that this country and in particular this city is famous for. Nothing major mind, just a Banh Mi sandwich but holy crap was that ever tasty and it's exactly the way I hoped – pate, sliced chicken, cucumber, cilantro, chilis all stuffed into a toasted baguette. Better than the one I had at The Nam Hai and way less fuss (isn't that always the case – simple is just sometimes better?). Oh I was a happy man. Two and a half weeks ago there was no way on God's green earth I'd be devouring street food after my little stomach incident, but now? Give it to me, that sweet tasty stuff (apologies for lyrical change Brotha James – one of my favourite songs by the way; listen to that bass). My former guide was right: getting sick did make me stronger so now I'm hungry for more!

Here it is – now I know to the naked eye it doesn't look like much and you may be thinking ah, it's just a baguette Steve, calm down - but those who know about these sandwiches know what I'm talking about, don't ya!! 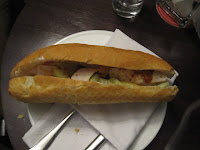 Pictures of Ha Noi to come in the next post!