Busan and the beach 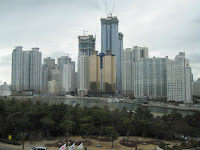 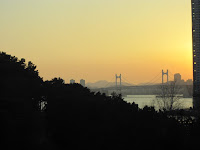 Not a bad little place I must say. God, what am I saying, it is hardly little – 3 million people live here! It's really nice here. A little like Miami and San Francisco rolled into one and I'll bet it's absolutely amazing when the weather is nice, sunny and warm (it was cold when I was there). Still, I got some great shots of the city so I'm happy.
Ok, so here's the story, and there always is one with me isn't there? I was to leave today for Japan by ferry, but panic set in so I took a plane instead. Why did panic set in? I made the mistake of doing research on the internet. I won't know what the ferry is like, but I'm SO much happier I flew. The internet is good for one thing as I said to a friend recently – porn (kidding – sort of). Everything is just so damn conflicting and confusing which is why I decided to take a plane instead of the ferry.
Honestly with the info you're reading regarding the do's and don'ts for ferry travel, and this info is mostly coming from from ESL teachers who are trying to figure out how to extend their working visas and purchase ferry tickets among other things at the same time - perhaps it's just not the best source of information for the rest of us who aren't in their twenties, who are there simply to travel and just want straightforward info. So here's what I "understood" from the many, MANY sources I ve scoured through online - get ready for an adventure in confusion.
1) You should meet someone who's Korean, friend or what-not (you know, because we all just happen to know and have Korean friends on hand to contact whenever we need them) to get the ferry tickets for you, or better yet, just show up at the ferry terminal as there are always cancellations and hey you just might get a ticket if your Korean contact doesn't work out. 2) Of course there is a Global ATM in the Fukuoka, Japan (actually the terminal is really called Hakata but what's in a name?) terminal where you can purchase Yen (money). Oh wait, no there isn't. You'll have to go to a 7-11 convenience store about one or two blocks away from the terminal, and woe betide of you don't have any yen with you when you cross into Japan . 3) You need money; both Korean Won and Japanese Yen to pay a departure taxes at both terminals. No wait, you don't, you just need to pay that departure tax in Korea only. 4) Why yes, yes you can get money exchanged in Korea at the ferry terminal bank. BUT. They service people are so rude and oh yeah, it may not be open on Sunday, and; 5) Ugh, J*sus H. Ch*ist enough!!! Wasn't reading the info above frustrating???? I'm sweating over the laptop, finally coming to the realization why in the hell am I reading what these people are babbling about that's making me nuts? Actually, change clothes: all that reading did me a huge favour. Here's your tip: Go to the airport. The airport was/is easier, plain and simple.
So here's what you should REALLY do:

1) Buy a one way or if you're coming back to Korea a return plane ticket from Busan to Fukuoka – one way is about 100 -200 bucks (not sure how much a return ticket is).

2) Go to airport, check in, then go to currency exchange, one of many in the airport that is - hooray - open on Sunday, and convert money from won to yen. Easy peasy.

3) Get on the plane and land in Fukuoka 45 minutes later. Again, easy peasy lemon squeezy so far eh?

4) Go through a bit of a hassle with customs (maybe I was the lucky one having to deal with an overzealous little guy but I honestly didn't care – I'm not Osama Bin Laden so go through my dirty underwear if you wish). Oh and they take your eye scans and finger prints too - so Blade Runner futuristic!! Get your passport stamped.

5) You're through customs. Get your bags if you have any checked, then get a taxi right outside the airport doors or hop on the subway - either way is easy as the airport is right downtown. Boom! You're sipping a martini at your hotel and for me that hotel was With The Style Ryokan in Fukuoka. HIGHLY recommended to stay there by the way. They make a mean Margherita pizza, no joke! AND the mini bar is free – FREE!!!!!!
Hey, I had my fun living in poverty in my twenties and ESL teachers with the visa situation? Best of luck but honestly I wouldn't want to switch places with ya'll. I like life SO much better now that I'm older and can afford to make my life on holidays just a bit easier:)
Just a few more pics of Busan! Next up - Fukuoka Japan! 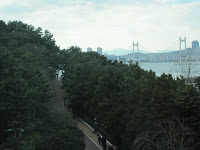 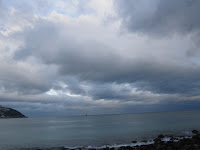 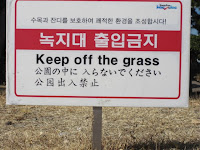 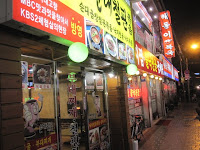 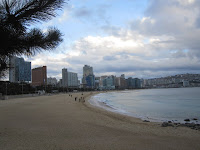 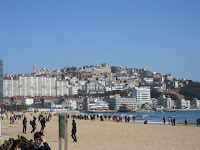 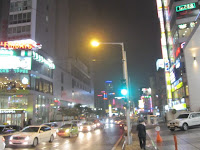 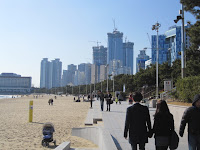 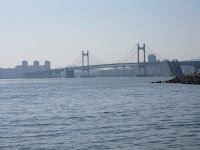 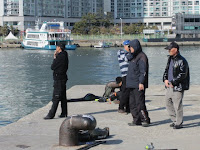 Email ThisBlogThis!Share to TwitterShare to FacebookShare to Pinterest
Labels: Japan, Round The World, South Korea