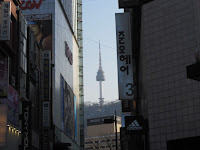 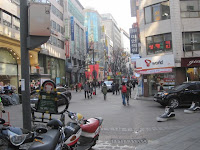 This post is going to be short. Why? Mostly because there isn't a whole lot to say about Seoul, except, maybe this. Look what I found while I was strolling about!!! 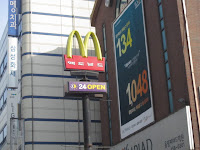 Ok I lied. It wasn't a casual stroll. It was a strategic search because I was really, really, REALLY wanting it – very badly. What's wrong with me? I chuckle now because I remember in culinary school Chef Wright, who was one of my favourite instructors, turning to me after tasting his fifth version of Veal Blanquette an saying " I wish I had McDonalds - yes I eat it". I laughed then and look at me now. I still can hear myself over the years saying "oh I'll never eat it again" yet I'm on the prowl for it and was oh so happy when I was eating it. I took pictures haha I couldn't help it. The even deliver here, see? Look at the delivery mopeds! Cool eh? Ok I'm sorry it's no kimch'i or pulgogi or even ginseng chicken soup (which I could sure go for during this cold weather) but I just wanted this. You'll forgive me for that right? 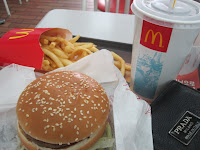 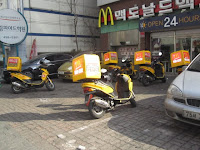 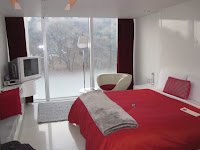 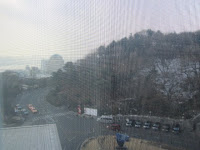 I'm staying at the W Hotel. Look at my room – so hip it hurts. Blinded by the white (which put this song in my head)!! Despite this or because of this, The W hotel is THE place to go particularly for drinks, The views of the city are spectacular and I will say that last night's meal at their restaurant called Kitchen was absolutely fantastic. From the app of delicious Serrano ham crostini with melon to my main of salmon (almost tartar, the fish was that soft and cooked perfectly just the way I like it – nothing worse than tough overcooked salmon) and amazing crab ravioli? So good. Mango cheesecake for dessert but again, no pics - sorry. I'm really going to work on that for Japan I promise. Tonight I had Spaghetti lobster bolognaise and warm apple berry crumble with cinnamon ice cream and a little vial of real maple syrup(!) for dessert. I took pictures this time but it's a not a great pic of the pasta because I had half finished it before I remembered to do it. Oh well. I do want to mention the attention to service here as well. Beyond exceptional. This hotel didn't do what I ve noticed is something of a habit here in Asia –actually, I really noticed it more in Vietnam. The wait staff have a tendency to hover and swoop in the minute your fork hits the empty plate or your glass is just about empty. Disconcerting but what can you do. Some people may like that but I know I really don't like to feel like someone is watching me intently while I try to finish my meal or drink my drink. We are not used to that in North America – actually, come to think of it, I think we d be surprised/shocked at that level of attention in North America!! Anyway I realize it can be distracting/irritating but I also have to keep in mind that I am a guest in their country, so ya deal. 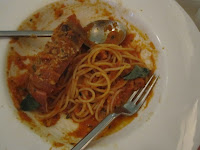 Ok so back to Seoul. Yup, it's a city, a pretty big one at that with loads of people – very friendly people actually. For once I didn't feel like a human specimen although I was CLEARLY the only non Korean face on the subway (at least when I was on it). Digressing a bit: they have very modern subway platform barriers – learn from this Toronto! So yeah being the only black face at that point should have felt weird but it was nice that even though I didn't blend in I wasn't noticed much either. Or maybe I was and I just wasn't paying attention? I later found out neighbourhoods like Itaewon and Hongdae are where most of the foreigners are (there is an American army base around there) Maybe that explains the non curiosity – there used to it? Doesn't matter. Anyway I didn't tour much of the city. I started out with good intentions but frankly it was just too damn cold to want to do anything but sit in Starbucks and drink tea (McDonalds? Starbucks? I know, I know…). There is snow here – not a lot, but it's cold enough for it. Apparently last month was the coldest on record!! Thank God I m not staying in South Korea all that long. 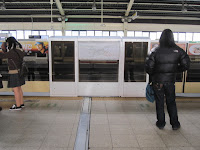 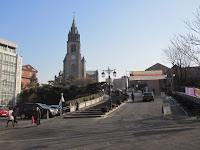 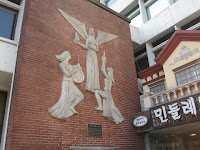 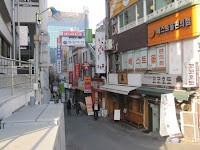 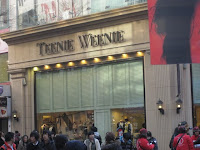 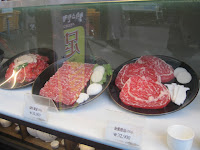 Wow looks like I was wrong about the length of the post. Turns out I had a LOT to say haha. Anyway the last two pics above I particularly love because:

a) Imagine going to a department store called Teenie Weenie (caters to both sexes just FYI)? and;

b) That beautiful piece of meat that was in the storefront window of this restaurant just caught my attention and I was practically licking the window. Just look at the marbling of the meat (message to my buddy Shawny Mac - can you imagine that grilled with a piece of compound butter melting on top? Oh yeah my friend, I know your drooling now!)

I liked Seoul a lot. Glad I came but I'm also glad I changed plans so I wouldn't be here for two weeks. I think that would be pushing it quite a bit. I think one more day here, come to think of it, the entire time here would have been way better if the weather was a lot more on the warmer side. Next stop Busan, then Japan!