A special ‘friend’ comes to dinner in Bali *

*FYI: this is a pretty graphic post so be forewarned!
Oh and don't forget to scroll down the blog for new posts!!! 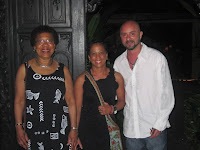 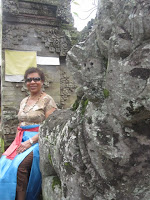 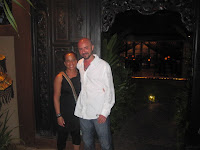 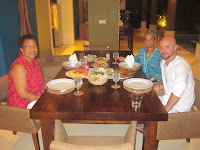 Pic 1: Left to right: Mum, my sister Marcia and her partner Leon
Pic 2: Mum at a temple.
Pic 3: Marcia and Leon.
Pic 4: Final BBQ dinner at the villa.


So I was very, very, VERY happy to have my family come to meet me in Bali. They had to fly 18, 000 Km through three different cities, three countries, and over the Pacific Ocean to do it but we all agreed the jet lag plus the loss of two days was worth the hassle! I think I just made flying out to Bali from Canada sound pretty awful haven't I - Sorry about that. My Mum and sister both assured me that it's really not that bad. Mind you they are travelers AND troopers so they wouldn't make a big deal of it, and were surprisingly well rested by the time they made it to the villa! Man, if that was me it would not be pretty as I have a LOT of trouble sleeping on planes but I digress.

The time flew by so fast though! In the short time they were in Bali they managed to really explore the Island, visiting places like Ubud, Seminyak, Kuta and a few other areas. We had dinner at Sarong; an Indian-South Asian – Balinese fusion (I know, I was like huh? too but it's pretty good food) hotspot in Seminyak. We also dined at Kuni's Bali; a very nice Japanese restaurant and a few other great places. We went shopping (Seminyak is crazy good with the variety of stores you can browse) where I managed to find some fantastic artwork (finally). It really was an amazing time together but what I really wanted to share was a story about our last day together before my sister and her boyfriend had to fly home.

Look at this spread below, doesn't it look so damn tasty? 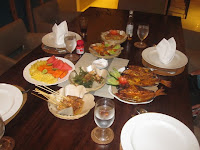 It was a specially prepared BBQ dinner made right in our Villa by the staff at the resort. The table was set by the pool, and we were provided with a real Balinese feast: Indonesian fried rice (Nasi Goreng); chicken satay with peanut sauce; spinach with peppers and garlic; bbq'd whole red snapper and prawns with garlic sauce, and; fresh fruit for dessert!! Just an incredible and tasty looking spread. Mum, Marcia and Leon tucked in. I ate none of it. Oh I had a few bites but it wasn't because I didn't like it. Hell no, I would have loved to have wolfed it all down, and knock back a few dark rum and cokes while I was doing it.
Sadly, it wasn't meant to be because there was a problem developing that day (starting when I woke up) that turned into a real issue that evening. Ya see, the previous night Leon and I were in the mood for – wait for it: McDonalds. So we ordered it from the local Mc'D's outpost and had it delivered to the villa. Yeah, I know, but it was a craving and if you've been reading the blog long enough you're aware that I've actually gone hunting for it so you shouldn't be surprised that the McDonalds head would rear itself sooner or later on this trip.
Surprisingly, and shockingly come to think of it, when the food arrived at the villa, I was a bit cagey about eating it. My instincts said this just didn't look nor smell right, but whatever, I was hungry so I ate it anyway. Ghus began the fun from hell. I woke up the next morning and I thought I was hung-over from drinking too many rums and cokes the night before. After careful examination of the bottle and recollecting my drinking behaviour with my family, I knew that was simply not the cause of the body chills and nausea.
As the day went on I felt progressively worse and worse, and then I knew – I just knew what 'it' was that was making me feel like shit. That careless 'whatever' dismissal plus ignoring of the usually right instincts regarding my first impression of last nights' McD's ended up costing me:

I'm sorry for the graphic descriptions but I have never ever been as sick from food as I was after eating that Big Mac. Now can you guess who the special friend was that came to dinner? That's right, my good friend; food poisoning. Oh FP, I thought you were gone forever after Vietnam but nope, you decided to return with a vengeance. On the bright side, only getting sick twice after eight months of travel is a damn miracle!! One more thing: I won't be hunting for McDonalds for a long time to come. Yeah, the craving, the desire, it's gone, gone, gone.

As for Leon? Luckily he came out relatively unscathed (damn him – joking, sort of!!)

So that was my last couple of days in Bali – nice way to end a holiday don't you think? Still despite that awful experience and it was awful, let there be no doubt about that, it was an amazing time with my family. I was so glad they could come.

After Mar and Leon left, a few days later my Mum and I made our way to Australia. Although my stomach was not fully recovered when we did make the move all I can say is thank God the worst of it happened before we had to get on that plane. I don't even want to imagine what the plane journey would have been like having to suffer and share puking and chronic diarrhea with God knows how many other people well aware of your 'issues', ugh <<he shudders at the thought>>.

Ok enough 'd' and 'p' talk. Next up: Aussie, Aussie, Aussie – Oi, Oi, Oi! Yep, kind of an annoying chant but you can't escape it and as they say, when in Rome right? Could be worse - I could serenade you with my version of Waltzing Matilda and NOONE wants that!
said Steve at 4:33 AM