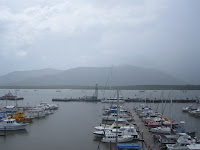 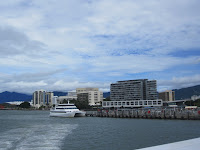 As mentioned in the previous post, my trip to Alice Springs was cancelled partly due to weather, and partly due to a few other tourists changing their minds about visiting Alice Springs (due to the weather) and cancelling, therefore, the Outback tour company I was originally booked with wouldn't do the tour, and wanted me to switch to someone else. I wasn't going to do that so fine, no trip to the outback thus no worries as they say here. That was a long explanation, but I previously wrote blah, blah, blah, as an explanation about this in the last post so I figured that it really warranted an actual explanation.
So thanks to the cancelled event, I spent a few extra days in Melbourne and I wasn't complaining about that! C'mon, I've been travelling for a while now, and believe me I've learned a thing or two about cancellations/changes/what have you, and I understand that these things happen so what would be the point of complaining? It's just wasted breath and energy. Yeah, it would have been nice to at least see a little bit of the outback though. Oh well, I had another adventure waiting for me.
I hopped on the plane (at 6:15am - ugh, can I just say that early flights are hell?), and made my way north to Cairns (pronounced "cans" dontchaknow) for a couple of days. 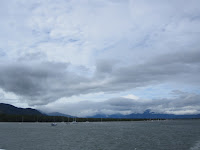 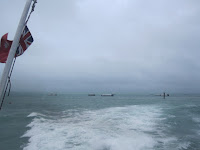 Apparently the rumour in Cairns was that Prince William mused about spending his honeymoon there. First thought after hearing that rumour? Yeah, right. Second thought: why would he? I mean it's nice enough and all, but the very idea of royalty honeymooning in Cairns? Cmon - who are you kidding? But I digress. The main reason why I went to Cairns was not to hear alleged royalty hearsay, but to go to see the Great Barrier Reefs - a UNESCO World Heritage Site. It's supposed to be visually stunning, and I was planning to sign up to do some underwater snorkelling, as it's supposed to be the best way to get a really close view of it. Now you will note that I 've said 'supposed' a few times in that last paragraph. You see, I wish that I could tell you that my plans actually happened, but it all failed spectacularly. Here's the story.
I bought my cruise and reef tour day pass by some very skeptical ticket agents, whom warned beg=fore i bought anything to literally abandon the ship - so to speak, as the weather was not the best for sailing. I noted their concern, and truth be told I did find myself glancing skywards a bit more than usual after my conversation with them, but still, I soldiered on. I walked to the dock, waited in a short line and eventually boarded. After a choppy start, we made our way to the first of two stops on the trek. We stopped at a place called Green Island (Please take a peek at the pictures above- you'll note that with the second picture, it shows the departure from the Cairns port – take particular notice of the colour of the the sky in both pics). At the Green Island docks, we thankfully manage to remove a huge group of very, very, incredibly annoying passengers/tourists (so annoying that I swear your dear sweet Grandmother would actually want to resort to physical violence to shut them up!!) thankfully disembarked. Now since I've been in Cairns the weather hasn't been the best: windy, sort of rainy, not nice but it was warm at least but note another word: 'windy'. So the really irritating passengers got off at the Green Island port stop and the rest of us (Id say all in all there were about twenty of us out of hundred left) set off for the reefs and that's where trouble really began.
Now I've previously stated that I was warned before I even got on the cruise by the ground staff about sailing conditions. It was very windy out on the ocean, and the water was quite choppy and perhaps I may want to cancel? I didn't/couldn't cancel because I only had a very short time to visit Cairns on my schedule, and this was my one and only chance to see the reefs. I should have listened because oh my freakin' God it was truly awful out on the water and it got worse the minute we started on our way to the Reefs from Green Island. Holy Mother I do not like an angry ocean. It is not pretty (or safe) at all. Picture huge, huge waves smashing against the boat and no land mass visible - at all. Picture a boat going up than dropping down like a roller coaster ride as it crests a wave and plunges down the other side. Picture your heart in your stomach, your stomach in your mouth, hands gripping the cruse chairs for dear life just praying you'll make it out of this nightmare alive. The waves were just so f*cking huge. It was SERIOUSLY scary.
After about five minutes (but felt like an hour) of being chucked around like child playing with a toy ship in the bathtub, the captain then announced over the pa system that we were turning back to Cairns because it was just too dangerous to continue. "Uh, d'u -, ya think??" Holy crap have I never been so relieved to hear a loudspeaker announcement in my life!! We hightailed it back to Green Island where the passengers then had the option of either going back to Cairns or staying on the island. Yeah, I wasn't about to stay on that island with those tourists from hell, so I got on the next ship back to Cairns - which actually turned out to be fun thanks to a few passengers/tourists I met and water drenching all of us on the poop deck. I got off the boat and made my way to a quiet spot for a very nice bite to eat and a much needed gin and tonic to calm the post-sea jitters.

You know, as I think about it, that was a real damn shame about missing my chance to actualy see the reefs. The staff back at the hotel told me the crap weather was a good excuse for me to come back to Cairns and even hang out at the hotel (the staff seemed to like me a lot), but, umm, I can't really see myself returning but yeah, we'll see. So that was my time in Cairns. I told you it was a short but very memorable stay (three days, two nights). The next day I was on my way back to Sydney to catch the plane for New Zealand.
And this pretty much ends my postings about Aussieland.
So now that my time in Aussie land has come to an end, I have to add a few things about my visit that may have been missed:


I'm really going to miss Australia though 'sigh'. Moving on though right?

Next up: The New Zealand Chronicles
said Steve at 4:05 AM

Email ThisBlogThis!Share to TwitterShare to FacebookShare to Pinterest
Labels: Australia, Round The World