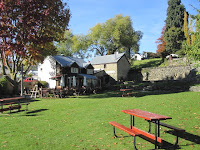 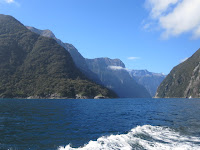 Ok, so this is the official start of my New Zealand trip and subsequent postings! I will be spending two weeks here starting in the South Island and going to Christchurch, travelling further south to Queenstown with a few stops in between (Ashburton, Lake Tekapo), then back north through Milford Sound, Franz Josef, Greymouth and back to Christchurch. I then take the bus to Picton, cross by Ferry to the North Islands where I visit Wellington and head up north to Auckland. It is a pretty busy schedule - about 4000 km will be covered mostly by car, some by bus train and/or ferry and I will be accompanied by my driver and guide Sheriff Alex. Crazy eh? Yeah you can see why I'm calling the next bit of posts chronicles. The sad thing about this is that New Zealand signals that I'm just about at the end of a world trip that began last year – can you believe it?? I can't even process that yet.

At first when I signed up for this part of the trip I was booked to do the self driving tour. I thought to myself what a great way to save some money AND get a first hand glimpse of the countryside driving along; I can do what I want, stop where I want, you know, all that great road stuff. Turns out ditching that idea and getting myself a driver was the best change of plans ever. I mean it's not dangerous or anything but driving in New Zealand can be stressful when:
I thought ok I didn't fly all this way to stress myself out right? Right. So anyway enough with the justifications and on with the tour!

Short story: Before I was to arrive in Christchurch, at the hotel in Sydney I was chatting with a bartender who happened to be from New Zealand (who else would it be?) and he ended up showing me some before and after shots on his iphone of Christchurch after the February 22nd earthquake. The pictures were devastating, sad and quite frankly depressing and I was silently thanking Meg at Global Basecamps that she didn't book me there longer than a day! Even the hotel I was originally supposed to stay at was not in any shape to handle guests (when I arrived my guide told me the building would be knocked down along with hundreds of others in the CBD) so I was switched to somewhere new at the last minute. Thank you for doing that guys, I knew it was hard work considering that almost every motel and hotel in the city was completely booked up due to residents staying there who lost their home in the quake.
Below are some pics taken around Christchurch - they don't show even a little bit of the disaster but I think you get the point. 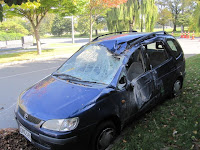 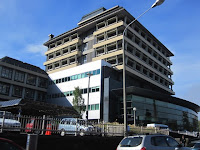 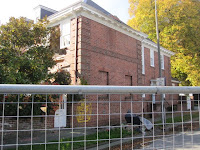 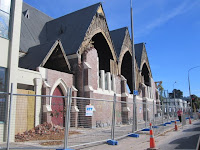 Can I just say that the airport in Christchurch was a total trip? And when I say trip I mean it was just such an unexpectedly brain foggy moment it made me think ok I'm in for an odd time here. Now let me make this clear to all: if you are coming or plan on coming to New Zealand, make sure that you have NO fruits, veggies or any plants on your person, at all. NONE!!! They are deadly serious about that stuff and will check you, your luggage, purses, what have you. They have sniffer dogs and they use them. The dogs are cute and all but it's disconcerting seeing them at work sniffing everyone's luggage. Your thinking to yourself, hmm I wonder if it can smell the apple I had in there three days ago, surely I ate it didn't I? I can understand the overzealousness to protect NZ's fragile eco system but it was still a bit weird to see, particularly after being in countries around the world where they really should have had sniffer dogs in action – mind you who's to say they didn't behind the scenes? Ok digressing there. At least they were polite to everyone about it.

After that experience, I was met at the airport by Sheriff (pronounced share –eef) and after introductions we went for coffee and talked about the itinerary for the next two weeks. At that point I was too excited to be there and didn't make any changes to the plans but I know me and I know it was coming. After that he drove me around Christchurch and, well, some parts were untouched thank God by the quake but the parts of the city that were? Totally ruined or destroyed and it was heartbreaking to see.

One uncomfortable night later (woke up briefly mid morning to bed and windows shaking - aftershocks are still occurring in the city), Sheriff picked me up at 7am and we were off to the farm for my farmstay with Ken and Anna in an area called Ashburton.

Next up in the chronicles: The oddness continues; my farmstay visit and trip to Queenstown.
said Steve at 2:46 AM

Email ThisBlogThis!Share to TwitterShare to FacebookShare to Pinterest
Labels: New Zealand, Round The World