War of the roses*

*it's actually parsley, not roses.
That's right folks, it's come to this. My post heading belies an anger that I never felt before, and it's not over roses, it's over parsley. You see, last year I planted a garden and it didn't do so well. This year I made a promise to myself to become more vigilant about maintaining the garden to ensure success. There is new topsoil, manure and mulch. I have planted tomatoes, cucumbers, zucchini and peppers. Rosemary, oregano, and basil are doing well. There's been a lot of rain this past month so the plants have been growing beautifully. That's where the good news ends.

The bad news is that there is battle occurring in my garden, and that fight is over parsley. I had planted both flatleaf and curly parsley bushes twice so far this year, and twice they have been destroyed. Leaves eaten and poor pitiful stalks remaining. As it turns out, thanks to constant monitoring of the garden morning, noon and night (disclosure: this garden has become a wee bit of an obsession), I'm waging a battle with either rabbits or woodchucks, and they are winning!
Yes, yes, animals, particularly rabbits, are cute and fuzzy and isn't Bugs Bunny hilarious etc. etc, but I'm not feeling love or laughter right now. I'm feeling violent. I have done everything I can to stop the attacks. I surrounded the plants with an iron fence. I planted a ring of marigolds around the iron fence because apparently the scent of the flowers is gross to them. They tore them to pieces. I even pissed on the garden (yes, you read that right) because apparently human urine is supposed to be a deterrent. Oh please spare me the shocked reaction,this is war people, and it's never pretty. Regardless, nothing has worked. Final score: rabbits 2 - Stephen 0.
So I give up, at least on the parsley part. Congrats rabbits or whatever, you win, but, and I'm quoting Phoebe Buffay from Friends here, I swear to Lucifer if I ever catch them in my garden again, well, lets just say this winter I'll have rabbit fur-lined gloves to keep out the cold. I'm sure I may have offended someone with that last statement but you know what? T.S. It's my garden and I'll rant if I want to!
This is the garden. 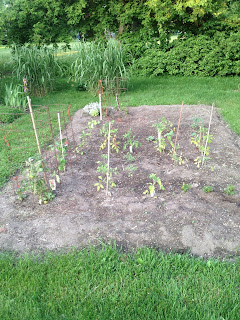 I know this is strictly amateur gardening here, but I'm proud of it. Lets see how it goes this summer!
UPDATE!!! July 5, 2013 - So it turned out to be a woodchuck, not rabbits eating the parsley. I hired a "varmint catcher", who set up a trap and two days later, a woodchuck was caught. My God it was huge and of course, not very happy to be in a cage. Seeing it trapped made me feel like absolute crap, but I was assured by the catcher that it would not be harmed and released into the wild. As he drove away I took a breath and put it out of mind - until the next day when what do I see running from the garden into the bushes? Another woodchuck!!!!! No words....
said Steve at 9:04 PM