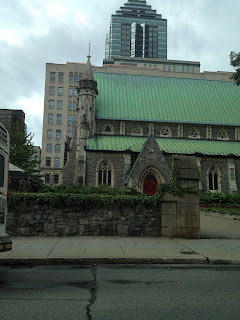 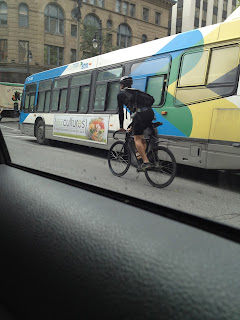 God I take crap pictures, but I at least had to take a pic of the biker (not the bus)!
I read somewhere that serious writers never stop writing. Why is that quote all of a sudden relevant to the hungry man blog? Well, it's taken me eight days to finish a blog article that should have been done immediately. Now I've re-read past articles I've written, and despite the babble I never said I was a professional writer. Anywhere. So I can forgive myself...sort of. And honestly, there were/are times when I think it's a miracle that I keep this blog going! Of course that statement alone might open up a serious box containing the question "Why DO you keep this going Steve?" Enough digression, I'll just finish my adventure in Montreal piece.
Right, so the last place I left off was the train, and in particular, the food. Again it must be repeated that, in my opinion, it was surprisingly tasty - but of course I KNOW if my (culinary) friends were with me, we'd have a great discussion about food, trains and the impediments that may be blocking the test kitchens from having a true gourmet menu worthy of business class travel..did that sound elitist?? Yikes, but no apologies -ha!
Ok, so the train arrived at Montreal's Central Station, a drab building (and may I just digress once again and say that Toronto's train station is so incredible - the architecture, the grandeur, it's a beautiful building and is currently receiving a far over-due restoration to it's true former glory!) but who cares, I wasn't moving into the place. So I grabbed a cab and heading to the hotel.
The cab ride to the hotel was great. It gave me a pretty good look at a city I haven't been to in five years and you know something? Montreal is kind of falling apart. The streets are patchy, the sidewalks need repairing, it's like looking at an aging drag queen; You knew that she was f*cking amazing and oh so glamorous at one point in her life, but then the oncoming years sort of took it's toll on her face and body but thankfully not her personality. That's what I think of Montreal.
I love this city. I love everything about it. The dirt, the cracks, the missing bits of pavement, but especially the men. I had forgotten how hot Quebecois men are, and I was given a very quick reminder:). Oh, and after I settled in I ended up having dinner at the hotel restaurant, Laurie Raphael. The restaurant is ultra cool in that gross, douchebaggy way. And it was a seriously unremarkable meal of bowtie pasta , pork belly, chanterelle mushrooms and green peas, drenched in olive oil. C'mon!! Blah. Thankfully the chocolate dessert trio (for the third time that day - I was having a chocolate overdose what with the train and now the hotel?!). The plate was dripping with chocolate goodies: a mini chocolate covered ice cream stick; a chocolate mousse, and; chocolate cake which was sooooo freaking incredibly good. Thank God. See, it was at this point that I was thinking "ok, the dessert made up for some things but that's it, I'm finished with these ultra modern hotels!"
It's fine. I ended up hanging out with sexy Phillipe at the hotel bar, passed out later after too many G&T's in my comfy bed, and left the next day, hungover but thinking about where I'd stay the next time I visit.
See, I think trips like that are ok every once and a while - single or couples (even if you have kids, no excuses, park them with Grandparents and give yourself a mini-holiday!). Yeah, maybe a longer stay might be better depending on budgets, but it's also perfectly fine to visit a place, see it, eat it, sleep it and leave it (I'm taking ownership of this: see it, eat it, sleep it, leave it - awesome!). There should absolutely be no limits/limitations to whatever your travel plans may be - one night or twelve. When you head off on holiday, do what you feel, when you feel with no apologies!
I love mini vacations, can you tell?
said Steve at 9:29 PM