Alright so it was only Montreal, but hey, that is a huge deal considering I've gone nowhere so far this year (Ed: waaaah, cry me a river Steve - first world problems are the worst right?). You think the opening sentence was a shake of the head moment? Wait'll you see what I write next!
So I've decided, after a very nice stay at Le Germaine, that I'm over boutique hotels. There, I said it and it is now out on public record. I'm finished with ultra modern design. I'm tired of sleek furniture modelled after some futuristic crap, with tables that light up and all that annoying shit that comes with making sure you have a 'fabulous' hotel room. Of course it's my own damn fault for booking there, I mean what else did I expect? Look: 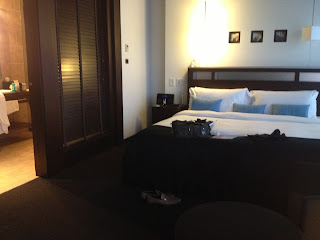 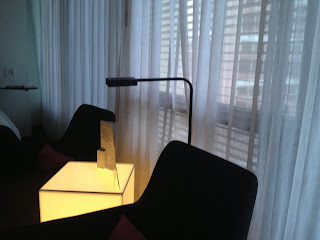 See what I mean?
Now hold up, I'm not saying I'm heading back to hostel life (which was awesome at the time - I stayed here for months when I lived in London! Awwww BUNAC hostel....good times). What I am saying, is that I think I find myself leaning towards the old fashioned hotels. You know the type - panelled walls, quiet hotel bars with a fireplace.. Yikes what's happening to me?
Ok that's enough about hotels. Can I just say, and I think I'm repeating myself here, how much I LOVE taking the train? Sure, it may take a little longer to get to your destination (i.e. Toronto to Montreal - about five hours by train, an hour and half by flight). But that's not the point. The point is that it's the MF train! C'mon, who doesn't get excited taking the train? VIA is awesome, and even better if you get yourself up to Business class (yup, here we go), 'cause you'll get the real deal there: loads of food, loads of liquor, and loads of space. Oh and since this is a hungry man travels, I suppose I should mention the food. I'll start with le cuisine de VIA train (I made that up, pretentious non?).
So I had this for lunch: 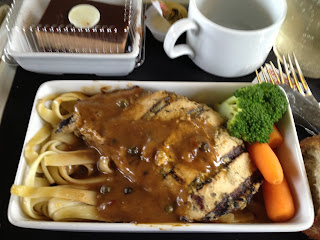 It was a "Malaysian" style black peppercorn chicken breast, with noodles and vegetables, and although presentation was strictly airline stylings, it was surprisingly tasty - salty, but tasty! The meat was very tender and I get the nod to the amazing Malaysian cuisine with the chicken, but I highly doubt this would be served to any Malaysian family or frankly anyone who loves Malaysian food, but I digress. The noodles were not overcooked (hooray - mushy noodles are awful) which is quite an accomplishment considering where this is being served. Even the veg still had a bit of crunch, no wilting or limping on my dining tray! Dessert was a chocolate mousse which was also very tasty; nice, light, and chocolatey, and not Nestle cheap chocolatey, but actual real dark chocolate tasty. Then they came around again with chocolate truffles on a tray and endless amounts of wine. I took the lunchtime train, and I would have been sh*t-faced by the time I got to Montreal if I had said yes every time they came around with wine and liquor! The older gentleman in the seat behind me was totally out of it after his fifth glass of chardonnay, God bless him. He was snoring away, missing out on the fantastic scenery going by...
To be continued...
said Steve at 11:07 PM