See it, eat it, sleep it, leave it: a visit to Tampa, Florida 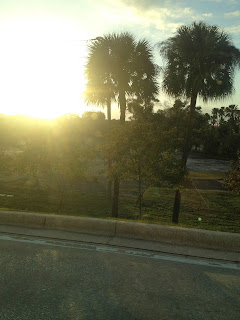 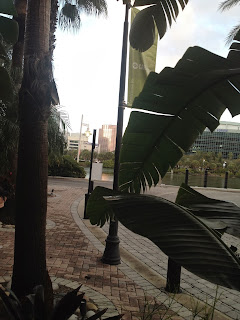 Look - palm trees! Oh how I missed thee (he says from freezing cold Canada)
So this hungry man found himself heading to Florida for a few days, and after this visit I've come to a few conclusions:
1) I should have stayed longer.
2) I should have booked a hotel MUCH closer to the beach, and;
*3) I should avoid visiting on Superbowl weekend.
*(caveat to this conclusion: I SHOULD visit during Superbowl weekend! The airport is awesome - so quiet, security is so fast - yes, you'll have to deal with a few airport employees who would clearly prefer to be at home watching the game but oh well). Ah, the Superbowl. I swear that's all everyone talks(ed) about, which I completely understand. Football really/truly is an obsession here. "Are you here for the Superbowl?" "Are you gonna watch the Superbowl?" "Have a favourite team for the Superbowl?" Easy questions for me to answer: no, no and no. But I don't begrudge the excitement or the questions at all. I will be just as excited when the Stanley Cup playoffs begin, not to mention watching Team Canada at the Olympics and even MORE excited if the damn Leafs actually make it past the first playoff round (no comments please from any anti-leafs out there ok?).
So back to Tampa. I'll say this straight-away: I had a great time! I wasn't sure what to expect but that's ok, I've kind of learned to just go with the flow. Come to think of it, when I look back on my travels, I don't believe I've ever said I've had a bad time - anywhere - or have I? Hmmm, I'd better re-read some of the posts.
(Two hours later)- Ok so after a quick scan, I might have concluded a place may have been mediocre, but never bad. Travel is what you make of it. I really try to make an effort to get out there and discover the places I am staying - sometimes with success, other times with a LOT of effort. I have also come to realize that despite saying recently how much I'd like to start traveling again with other people, I actually like traveling alone - maybe even prefer it? I just find it a bit more adventuresome that way, plus, you end up meeting a lot more people. That last sentence was especially true when I went out to dinner at a place called Cafe Dufrain at Harbour Pointe in Downtown Tampa.
Quick preface: I stayed at the Intercontinental Hotel Tampa (I stayed for free!! Hey, membership does have its privileges - the only negative was that it wasn't anywhere close to a beach!), and I asked the front desk to recommend a decent French restaurant for dinner. Now I'm not sure if she quite understood what I meant by French restaurant because you know how confusing that can be, but somehow I ended up at a place that had a French name (the aformentioned Cafe Dufrain), with a menu that I know damn well would never show up anywhere in France. That was the odd dinner news. The good dinner news is that she ended up making a good choice for me. For the first time ever, and after MUCH curiosity as to it's popularity, I stayed and ate - wait, are you ready for this? Chicken and waffles. Chicken and waffles!! No duck confit. No fois gras. God not even a profiterole. I know, I know, stereotypes abound when that particular dish is mentioned, and so be it, because it was awesome! Look: 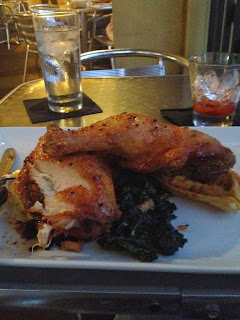 Oh God it was so good. My server Amy said it would be, she highly recommended it and I'm so glad she did. Crispy, so, so, sooo amazingly crispy chicken legs with cheddar, cornmeal waffles, and kale with bacon made this dish incredibly delicious. Such a simple meal yet so tasty. I love that. She said it was by far the most popular dish on the restaurant menu and I could totally understand why. The chicken legs had the bare minimum of seasonings: sea salt, cracked pepper, butter which made for tasty, crackling, mouth-watering (getting the picture?) crispy, crispy skin and juicy chicken. I had the restaurants signature drink - an amber old-fashioned, to accompany the meal (I'm sorry Beppi, I tried to pair it but I couldn't resist the classic drink). I was drunk after two. It was at that point the evening got interesting. I ended up at the bar after dinner, met a couple of couples (Thanks Melissa & Joe, and Amy & Devin) and hung out with them for the rest of the night. It was loud - ok WE were loud but who cares, it was a great time.
Will I go back? Well, I think the blab above would confirm I will. Only next time I'm renting a little apartment or house, and staying on the beach!!
said Steve at 7:09 PM