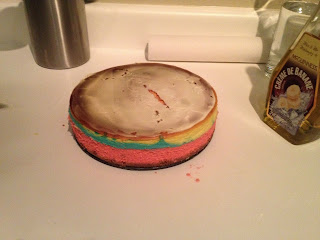 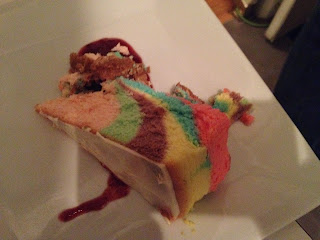 Rainbow cheesecake..yeah, I know...
This is it. Yes, it's that time of the year again - it's Pride in Toronto. And this year I decided to do something I haven't done in a very long time: actually attend Pride. For years I would avoid it, leave town or just generally prefer not to acknowledge it. I thought since I'm clearly out and proud, will going to a parade really make a difference to me or anyone else? Turns out yeah, it's really good to be a part of it. So I'm glad I changed my mind, because this years pride is truly a world event.
The 2014 Toronto World Pride will have all the great things the regular pride weekend had, but this year, the events, concerts, all the activities will showcase the contributions of Lesbians, Bisexuals, Gay and Transgendered (LBGT) not just from Canada, but from around the world. People are coming from places like Japan, Uganda, Iceland, Jamaica, Colombia to name a few to celebrate this event. So I'd say this particular pride is even more of a big deal this year that it usually is.
Events kicked off last Friday night, June 20th, in Toronto's Nathan Phillips Square. There were messages from event organizers and local politicians. Kathleen Wynne, our first elected lesbian Premier gave an amazing speech. It was one of those moment that I truly wished my deceased partner Robbie could have been alive to see just how much things have changed in the world, particularly right here in the province of Ontario - these past six years since he passed. Truly a wonderful/bittersweet moment.
The pride flag was unveiled, there was a special Aboriginal blessing and we sang the national anthem. Live music was provided by Melissa Etheridge, Deborah Cox and Steve Grand. It was amazing to be among so many people and it was one of those clear, warm Toronto nights, but woe betide the organizer who honestly thought three (3) porta potty's would be enough for 30,00O well-lubricated gay men and women. The topper? Apparently the porta potty's ran out of toilet paper too. Oh the puns that could be had just from reading that paragraph eh?
With so many amazing people, events - everything happening, what could I possibly do to contribute into making Pride a truly personal celebratory moment. Well, you do what anyone else does when they want to celebrate - you make a cheesecake! And since I was invited to a BBQ, I thought that's the perfect place to take it and share with friends.
The pics above tell you how it turned out. And if you guessed that the cheesecake looks quite colourful, it's because it was. Very colourful, one would almost say, like a rainbow - ahem. It was a rainbow cheesecake, a recipe I found online. It was delicious, and there was no leftovers for me to take home which is always a good sign. I'm smiling as I write this because I'm aware of how over the top it is/was, but yet it just seemed very fitting for me and my friends. Oh, and that is not a crack in the cheesecake. That was the result of the tinfoil cover ruining the sour creme icing surface, I swear.
Now I'm sure my reader is very curious as to where I found the recipe. Click here:.
I'm looking at the pics of the cheesecake and of course it would not make the cover of gourmet magazine, but help regarding my woeful picture taking abilities is on the way. I will be attending a food journalist association conference (I just became a member) in Memphis, Tennessee in a few months, and one of the conference topics is food styling using your IPhone. We'll hopefully see some (major) improvements in my food porn abilities.
Happy Pride everyone.
said Steve at 5:29 PM