What are you: A Traveller or a Tourist? 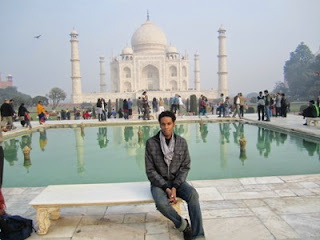 Quick photo story: the shot above was taken with some drama. My guide - who took the photo, actually pushed people out of the way to get this picture of me. The spot is considered the best place to have your picture taken at the Taj Mahal, so you can imagine the jostling and fighting to get on that bench. Oh well. Not a bad shot eh?
Let me start off with a warning. I've been thinking (and now he hears the collective groan of his readers). I thought this over and just had to address it. So what exactly am I when it comes to seeing the world? Am I a traveller? Am I a tourist? Is there a difference? Is there a preference? Does anyone even care?
As it turns out yes, there really is a difference, and there is a preference and yes, some people care quite a bit whether you call them a traveller or a tourist, I'm just not sure I'm one of those people. After doing some research online, I've found that travellers really want to make the distinction very, very clear. Travellers differ from tourists, because they aren't on some pre-packaged adventure. They are s.e.r.i.o.u.s about travel. Travellers do not want to be lumped in with people who visit a place only to stay in the hotel, or just lie on a beach and venture out to a bar or restaurant - preferably in the hotel, at night. There are cultural implications to a travellers argument. They believe they aren't like tourists because they get "right in there" with trying to understand whatever country they visit. They spend time with the locals, eating their food, soaking in everything they possibly can.
Of course, to a casual eye, a 'real' travellers argument can sound quite elitist. Looking down your nose at tourists for simply wanting to escape their homes to go to a place where everything is taken care of, and they can relax in whatever environment they choose isn't great for their 'cause'. And after reading the viewpoints of travellers, I tend to think I may have gone on a tourist version of world travel rather than as a traveller. But, I'll add that I think or thought there were definitely some traveller elements to the trip! Mind you, anyone who chooses to read this blog - particularly the posts from 2010-2012, may have a different opinion about that.
That's ok. I couldn't care less if I'm considered a traveller or a tourist. But I do have to admit it was fascinating reading peoples opinions regarding the differences between the two. I can't quite believe it's been about about two or so years now since I embarked on my 'round the world' travel adventure. Wow. Every once and a while I'll just sit back and remember (or blog about it, kind of like what I'm doing now) the enormity of that trip for me. I've said many times on this blog and out loud to whomever was listening, that the trip was incredible. That it was tough too - mentally, physically and emotionally. And ultimately, it doesn't matter if you're considered a traveller or a tourist, just taking the time, not to mention being able to afford the opportunity to visit somewhere that isn't your home country, is going to be an experience you won't forget.
Whenever I have moments of self-doubt, I think of that trip and why I created this blog - even why I keep it going. When I complain about what I may be lacking or missing in my life, I think of that trip and shut myself up right away. I have had the privilege of doing something unique and amazing, whether it was as a traveller or a tourist. I've seen things I will never forget - good and bad. It's all a part of me now. I am the world! Ok, maybe that went too far.
said Steve at 6:14 PM