Away from there: A personal message for young African Americans 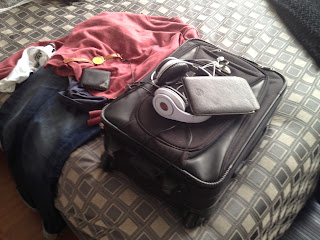 image courtesy of Stephen Wilson
There was a feature story in the New York Times last weekend, where African American college students were asked if they would be interested in leaving the United States for opportunities abroad. A program was created specifically for black students that offered a chance to live and work away from the States. No one signed up.
After reading that and the reasons why it didn't resonate with the students, I was incredibly disappointed, sad and pissed off. Economic reasons, the threat of racism, and just plain fear are justifiable as the main culprits that could and would prevent young black men and women from traveling, and why wouldn't it? If that's the life you are familiar with, why would you expect it to be different anywhere else?
Here's what I say to that. Bullsh*t.
That's just fear taking over your mind and clouding what could be an incredibly opportunity. What needs to happen with these bright, amazing young black minds is this. Hit the reset button in your life. Open your mind and understand that the United States is NOT the world. Then, pack those bags and get the hell out of there.
The world is a much smaller place than you'd ever believe. When I was in my 20's, I moved from my hometown and went abroad to live in London, United Kingdom. I had just graduated from university and took advantage of a similar program offered by my university called Students Work Abroad or SWAP. It was just an incredible time to explore and live somewhere else for a year. I was actually more thrilled to get out of Canada than the fact I was moving to London!
All I knew at that time, was this was going to be a chance to enjoy a new country, new cultural experiences, new friends and new opportunities. I got all of that and then some. That was over 15 years ago, and I still keep in touch with the friends I met from those days. It was one of the best experiences of my life and no doubt shaped my future attitudes about travelling solo, travelling without a guide, and more importantly travelling without fear as a black male.
I understand the fear, and I definitely understand how economics can get in the way not only of dreams, but reality. But as gross as the following cliché will sound, it's also very true - where there's a will, there's a way. People who would never entertain the thought of leaving their hometown, let alone travel to another state, will tell you "don't go there" or "don't do that" because they believe their negative experiences in life will be a mirror for you. They are wrong.
Let me make this clear, this isn't about running away, but a chance to take advantage of opportunity. There are so many more incredible career opportunities for young black men and women in these past few years alone, than there ever was when I was in my 20s. Take advantage of it, and again don't be afraid and most importantly, don't let the past determine who you can be in the future!
I know many of the posts on this blog have focused on food, but it's called a hungry man travels for a reason. I've travelled around this planet, and accrued some serious knowledge on what's happening out there, particularly as a gay, black man. My Mother, a black woman who is 75 years old, has travelled around the world, loving every minute of it. She would be the first to say that she didn't and would not let fear get in the way of her happiness to explore unfamiliar cultures, food, life - all of it. You shouldn't be afraid either. Don't be afraid, and I'll repeat that ad nauseam - do not be afraid.
Your experiences in life is what you make of it. Are you going to think "Well, I'm going to experience racism where I live, so it's bound to happen out there in the world?" My answer to that, is if you look for it, you'll find it. Travel, my fine young black men and women of America and Canada too. See and believe that it is not the same every where you go. Get the hell out of where you are, and see what it's like to just 'be', instead of living in fear of what 'is'.
America is not the world. You'll see and understand that better when you're away from it.
said Steve at 3:16 PM