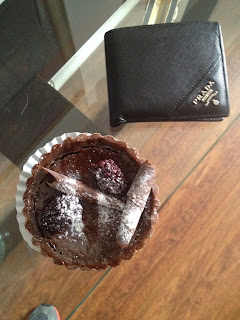 image courtesy of Stephen Wilson
Do you see the image above? If you guessed that it's a picture of my wallet, plus a very tasty looking chocolate tart, your guess is correct. Doesn't that tart look good? As I was heading home from a stop at the local Library, I decided to reward myself for even leaving the apartment by popping into Pusateri's, a local neighbourhood grocery.
The chocolate selection there is pretty outstanding, and if I could, if I was allowed, I would stand there and stare for hours at the all the tasty patisserie delights. Because why not? I love chocolate. I love everything about it. So there I was, staring at all the lovely chocolate treats, trying to figure out which of these tasty thangs will come home with me.
But here is the problem - staring at chocolate, or anything really, can make you (me) a tad absentminded. If you combine absentmindedness with staring lustfully at chocolate, you unnaturally become stupid and do things like, well, lose your wallet.
Norwegian writer Karl Ove Knausgaard can attest to this personality disorder. He recently wrote about his travels across North America for New York Times Magazine, and what I loved most about the piece was the instant recognition and perspective the author and I share when it comes to life: we're both not as careful as we should be when it comes to personal property.
Before his travels even began, he had lost his wallet. He didn't freak out though, because he does stuff like that all the time. Again, I can identify with that. I am notoriously bad for losing things. For example, I lost my wallet on the subway in Munich, only to miraculously get it back the next day - with everything in it! I was told, later that afternoon at Oktoberfest by a local, that München citizens are too wealthy to do anything so gauche as to steal someones wallet. You've been told.
But it was Knausgaards explanation for his own absentmindedness that really hit home. He wrote that it's good to have things like that happen to you, as it means that you're not 'on guard'. You're not trying to control everything in and around you. Losing things like your identification, passport, wallet are all signs that for once in your life, you're not being 'anal' about life. You're allowing yourself to be open to the world.
I f*cking loved that explanation, and I plan on using it every-time I misplace something from this point forward. I loved that he totally took a situation for which you'd normally - and kind of should be, accused of being stupid, and turned it into the best thing a person can do! Oh, the power of good writing.
So go ahead, lose that wallet because dammit you're allowing yourself to just 'see' the world without being encumbered by meaningless things like identification and money - things that pretty much allow you to move about in the world. I love it.
So I had Knausgaard in mind as I frantically searched my pockets, my leather bag, the floor at the checkout till for that stupid wallet. I thought, as I was sweating and trying to control my nerves, that it's ok, I'm seeing the world as it should be.
As I rushed out of the store in panic, rehashing all the places I may have dropped it, thinking "Oh my God I have to replace everything in that wallet", I smiled - nervously, to myself, and do you know why? Because losing that wallet sort of, kind of doesn't matter. This happened (again), because I was allowing myself to not be 'anal' about my life. I was relaxed, in my element, and was enjoying the world - of chocolate, around me.
About halfway down the street I got a phone call. It was the store. I had left my wallet on the display counter apparently while I was enjoying and embracing my world of chocolate desserts. I went back to the store, eyes and arms open, thanking the world - and Pusateri's, for finding what is essentially my life in a leather skin.
Oh, and if you think I left without that dessert you'd be wrong. Once again, check the picture above.
said Steve at 5:01 PM