Fraud and 'The Food Babe' 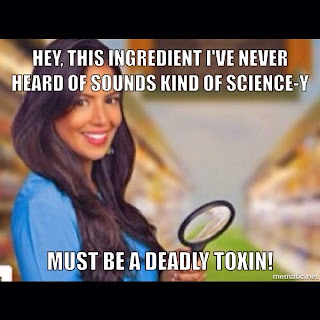 image courtesy of thetechchef.net
A majority of talented, amazing food writers struggle mightily just to get their name out there, let alone their words. The Internet has made that job slightly easier, but it's still a very tough road filled with unknowns, should have beens’ or wishes that won't become a reality. But every once and a while, someone manages to break free from the group, and somehow - whether it's by luck or talent - rarely both, becomes a success. With success comes scrutiny, and in the food blogosphere, ‘The Food Babe’ is facing a great deal of both.
Her name is Vani Hari, or as she is known to followers, 'The Food Babe'. That's her in the image above. Like most things in life, what goes up must eventually come down, and right now, Ms. Hari is experiencing a serious public relations (pr) crisis, or as I like to call it, a pr shit storm. You can read a few examples of what's going on here.
Ms. Hari has built a food blog and a massive, devoted following of ‘food babes’. She regularly reports "scientific facts" on many of the foods we like to eat on her site. She is also a huge proponent of the word ‘toxins’, and uses it liberally whenever she describes foods or products that may not be good for us. She has also been accused of being a massive fraud.
If you wish to be frightened by just about anything you put into your mouth including your own saliva, then go take a look at her site. Or read her interviews. Or see her perpetrating a great deal of false shit live on Dr. Oz.
I am absolutely not in the business of tearing down others who want to talk about food and make some money while doing it. I do, however, believe she has crossed a line between providing people with good nutrition information and creating a great deal of unnecessary alarm based on unsubstantiated scientific claims.
I also find her willingness to go out of her way to frighten people into some sort of food submission despicable and detestable. Here’s one example of Ms. Hari’s "food rules" from her site: "If a third grader can't pronounce it, don't eat it."
A response to that rule, courtesy of Yvette d'Entremont, editor of Science Babe food site - which was created as a direct response to the many false scientific claims made on The Food Babe website: "Don't base your diet on the pronunciation skills of an eight-year-old."
You have to love or at least smile at that response. I'll even add to that by saying something we already know which is do not believe everything you read on the internet. But even that advice is akin to talking louder at someone who has a hearing disability.
The rise and possible fall of people like Vani Hari just goes to show you how dangerous food fads have become. What’s worse is that it shows how quickly people believe something as long as it's backed by some pseudo-scientific fact, plucked from a dubious report, to give the claim a very, very thin layer of credibility.
Sometimes I get quite discouraged with what's happening in this age of ‘got-to-know-now’ instant information, particularly when it comes to what we eat. Have we reaching a tipping point of too much information and not enough facts?
The Food Babe certainly didn’t think so, and look at her now.
said Steve at 4:28 PM