image courtesy of realsports.ca
Travelling around the world has provided me with a fairly good understanding of the impressions people might have of the average North American. The consensus? We're loud, gluttonous and aggressive. With that in mind, I often wonder what some of the great citizens of the world would think of Real Sports Bar and Grill. Would it confirm everything they think about us? In a word, yes.
Real Sports Bar and Grill is Toronto's premier sports bar. Located next door to the Air Canada Centre sports centre in downtown Toronto, it is the Taj Mahal of everything sports and sports related. Entering the cavernous space is an assault - although not entirely unpleasant, to the eyes, ears, mind and sensory glands. 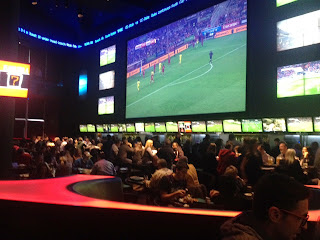 image courtesy of Stephen Wilson
Designed by famed interior and architecture firm Rockwell Group, the owners of Real Sports clearly dreamt big and designed bigger. Real Sports is not a quiet little pub for lovers to share a lovely little glass of port. This is sports bar(!), with about 199 flat screen TVs loudly dedicated to sports, and you'd better come to play. And pay. It was an instant hit when it first opened in June 2010, and for better or worse, it is now a fixture in Toronto's sports pub scene.
My dinner companions and I shared a variety of appetizer plates during our visit. As it was a Friday night, there was a five dollar vodka cocktails special night, the vodka was seriously flowing as well, but I didn’t let the alcohol get in the way of the main event: the food.
We ordered plates of steamed edamame with lime juice, fried calamari with a chipotle and lime aioli, pesto flatbreads with grilled asparagus and melted brie, and a huge plate of Thai sweet chili chicken wings. Now lets talk about the wings for a minute. I have never, in my life as an eater, cook and visitor of poultry farms, ever seen wings that size before. No joke. The wings were about the size of mini baseball bats. Look for yourself: 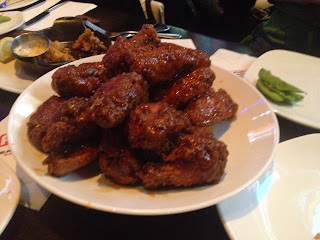 image courtesy of Stephen Wilson
It reminded me of when I was in a Tokyo department store food hall, and came across packages of perfectly formed strawberries for sale (for a look, click here). Sometimes you just have to overlook things that may appear out of the ordinary, and just enjoy it for what it is. That is one of my mottos, and in this case, I'm really sticking to it.
The flatbreads were delicious, as were the steamed edamame. The edamame was an odd appetizer choice for a sports bar that has dedicated half of it's menu to various types of wings you can order, but I can see why the owners would want to appeal to as broad as group as they can.
I believe for the next visit - and there will definitely be one, I will have to include dinner instead of just appetizers. The kitchen is capable of pulling off some pretty good starters and although it's not cheap, it's definitely worth a second glance to see how it pulls off a few main courses. I may just have to bring a pair of earplugs though. Maybe.
*05/11/15 - I went back to Real Sports for dinner with THG and a friend for her birthday. They ordered the baseball bat chicken wings I described above, and a caesar salad. I had an entree as I promised I would order in the original posting above. It was a shaved steak baguette sandwich with a beef jus for dipping, and a side order of fries (that were not crispy!). Boring choice? Yes. Nothing else appealed and there was a LOT on the menu. Tasty? No. It was as boring taste-wise as it was to order it. Disappointed? Not really. Kind of expected it so I wasn't disappointed. That's all.
said Steve at 12:34 PM