A Mad Men episode review: The Milk and Honey Route 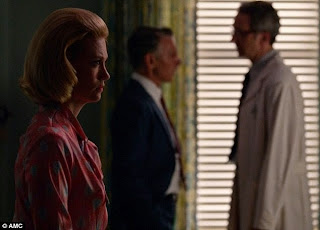 Betty Draper Francis - her reaction after being told she has terminal cancer
image courtesy of http://www.dailymail.co.uk/
I've written a few posts here and there about my love-on for this show. It's one of the few times that I've gone off of the main topic of food on this blog. As I say good bye to this incredible show, the last few episodes have been emotionally tough to watch. Witnessing characters that I have grown to love or admire slowly disappear each week as their individual storylines come to an end has been painful as it has been enjoyable.
But it was last nights episode that was truly difficult to watch. Dread rippled through every fibre of my body, because not only was that the overall tone of the episode, but the actors were so compelling, so incredible to watch it truly felt like you were watching something vivid, something as close to real life as television can get. The acting was just that good. I have never in my life hated television commercial interruptions as much as I did last night, which of course is the delicious irony of watching a show built on the business of advertising.
Last nights episode, entitled The Milk and Honey Route - was masterful television. It was incredible television. It was the kind of television programming that makes you want to shake people and say "you MUST watch this." From beginning to end. And it is the end.
I'm lauding the episode in particular, for its incredibly realistic and heartbreaking storytelling when dealing with the harsh news that a loved one is suffering, and will pass away from a terminal disease. It was difficult to watch one of the main characters - Mrs Betty Draper Francis (see the picture above, and portrayed by actor January Jones) being told that she was diagnosed with lung cancer and had only months to live. Her reaction is exactly what you'd expect - stunned silence. But it was her eventual acceptance of her health status, and her subsequent instructions to her daughter regarding what needs to be done before and after her death that really hit home for me.
In one scene, she tells her visibly shaken daughter that no one should have to watch the person they love die, and it was far better to have your wishes laid out immediately so that your loved ones know what to do after your death. It was poignant, it was tough and on point and it made incredible sense. Some people may not understand that. They may see it as a Mother being rough on an already emotionally shaken daughter. That she was being selfish, and that she was putting family members in the awkward position of having to deal with the wishes of someone who hasn't even died yet. But for me, it made total sense what she did. I wish it could be required viewing for people, so they could grab just a little more understanding of the difficulties of death and decision making during an emotionally fraught time.
It brought back painful memories watching it, and the letter she left for her daughter only added to the heartbreak. Sometimes, in passing, I wish that I had instructions on what to do, how to handle Rob's diagnosis and subsequent medical treatment when he had leukaemia. But now that I have gone through the pain and trauma of losing someone I loved to cancer, I know exactly what I want for myself if I ever learn that I may have an incurable disease or suffer the inability to function completely. I also know what to do and in particular, to accept any instructions from anyone I care about who also has to figure out what they want from life. And death.
I am really going to miss this show. Yes, there is cold comfort the program will live on in reruns and my personal DVD collection, but there is something about live television viewing that just made it that more special, more real. The finale is next week, Sunday May 17th. Sadly, I am going to miss it because I'll be away for the long weekend (Victoria Day weekend for non Canadians - Monday is a holiday) and won't be near a TV, nor will I be certain that internet connection will happen. Believe me when I say, that this is one of those moments where I was seriously debating whether a trip was worth it over a TV show. I know,crazy - but that's the strength of Mad Men. At least for me it is.
Saying goodbye will not be easy.
said Steve at 3:31 PM