image courtesy of www.dreamstime.com
No, I am not referring to the beautiful people of Denmark - although it must be said that they really are quite beautiful. I mean seriously, have you ever seen pictures of an unattractive Dane? If so, send it to me so I can add it to my pictures of unicorns and chupacabras. But I digress.
I'm talking about the tasty, sort of flaky - but not quite, jam or custard filled pastry. The pastry that goes so well with a cup of coffee or tea, or all on it's own. Has anyone else noticed that it's not nearly as abundant in stores or coffee shops as it once was? Is it just me that's wondering where all the Danish went?
I recently went to Starbucks with my gorgeous friend Hannah, and of course noticed the company re-launch of it's pastries, 'la boulange'. Despite row upon row of brownies, lemon loafs and croissants, there was no Danish. At least not in full view. Oh, and let me just add that in regards to this 're-launch', the company can call its pastries anything it wants too. But, believe me, any and all French pâtisseries have absolutely nothing to worry about.
I eventually found it tucked away in the far, upper right corner of the display case, but it was not what I had expected. I told my friend that really isn't Danish. She knew I was referring to the kind with the fruit or lemon in the middle, and all the icing. Yup, that version.
I have spent hours upon hours on this blog, highlighting my version of the somewhat good food life. I've rambled on and on about some incredible ingredient to add to a dish. I've prattled on about the tastiness of offal (thank you forever Black Hoof restaurant). I've debated - amongst myself, why foie gras should be a part of every meal you make.
But, when it comes right down to it, I know the truth. The truth is the majority of people would walk - no, they would run in the opposite direction when presented with this sort of food.
I know what would definitely make those same people stick around and nod with a knowing smile as they read this post. Danish - in particular, the trash-tastic version of it. You know the kind I'm referring to. The faux fruit filling, surrounded and smothered by that sickly sweet, white icing. So bad for you, yet, just so tasty too.
That's it. I'm renting a zipcar and taking a trip to Costco because I know that is the one place guaranteed to have it. Hey, the heart and stomach wants what it wants, so why fight it? My prediction is that Danish will make a comeback. If cauliflower can somehow become the latest food trend of the day, then so can danish. You read it here first.
Update: I got it! Look: 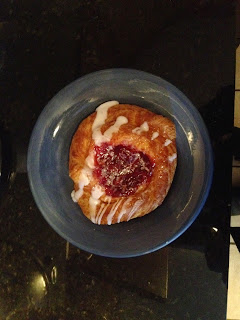