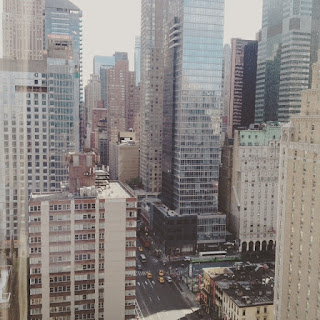 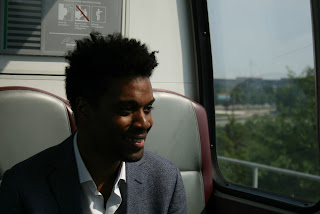 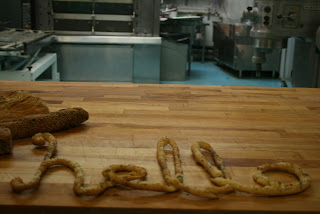 images courtesy of Marcia Wilson and Stephen Wilson
The time is now.
I kept repeating that sentence/song by Moloko (for a refresher, listen to it here) to myself as I made the booking to visit a city that's always been close to my heart and mind, yet the farthest from my current travel destinations.
It has been eight long years since I last set foot in New York. It was the prime holiday destination for my deceased partner and I, and after he passed, the desire to return waned considerably. But here's the thing about New York - it just gets under your skin, and like a chocolate addiction, you can never really stay away from it for long.
So after finally realizing that this city waits for no man, I gave in, bought two tickets and sped off to spend a birthday holiday weekend with my sister.
Now it may have only been eight years for me, but can you imagine the shock of not visiting the city since the late 80s? Yes, that's where my sister comes in. I know. I was shocked too. And to be honest, it was much easier on the heart and mind - not to mention much more potential for fun, to go with someone who didn't have sharp memories of familiar places and landmarks.
Of course, a hungry man went to New York not just to celebrate birthdays, but also to eat. It's always a great privilege to revisit what is truly the greatest culinary mecca in the world.
The culinary odyssey begins.
After a quick and painless flight from Toronto via Porter Airlines, we arrived in sunny, hot Manhattan sometime after 6pm. We checked into the Intercontinental Times Square, grabbed my personally written, hand dandy New York subway instructions and headed off to The Spotted Pig.
The Spotted Pig or 'the piggy’ was a personal must-visit food destination. It has often been mentioned in numerous magazines and websites for being the top pub in the city, and I wanted to know why. Located in the West Village, the pig has been around for about ten years, and has gained a reputation not just for its unpretentious decor and attitude, but also for its incredible food.
I suppose it's only fair to mention that it is also a perennial favourite of celebrities and power players, but frankly - and I've said this before on the blog, I could care less that Taylor Swift or Jay Z hang out there. I came to the piggy to eat what has been consistently voted as the best burger in town. 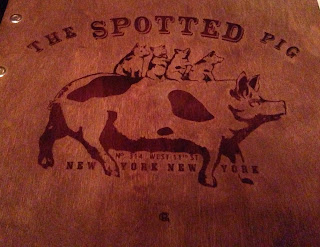 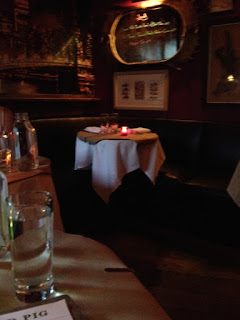 images courtesy of Stephen Wilson
Now it must be said that I'm not known for my patience, and despite my own directions, I was having trouble finding the place. Thankfully I had a patient person with me, and my sister was the one who wouldn't give up. So after calming me down, we finally, after a sweaty walk, located the place and I'm so glad we did.
When we arrived, we were told it would be about a two-hour wait. Fifteen minutes later, we were sitting down at a table in a quiet corner of the packed pub. Why were we singled out for preferential treatment? Who knows, luck and circumstance maybe? I didn't question it. Perhaps it was because the hostess was a fun, funny, awesome woman who took a shine to us. Either way, her generosity was definitely returned when we left the pub later that evening.
I had previously mentioned the decor of the pub being unpretentious, and it is. There are lots of little hidden nooks and crannies, and I can see why certain public figures would like the privacy of the place. I will again point out the casual atmosphere of the place, but the clientele is from all walks of life. Students, businessmen and women, ladies who lunch, romantic couples gay and straight, all pile in here. It is a perfectly democratic place in which no one would ever feel uncomfortable hanging in a suit, a vintage dress or a simple pair of shorts.
But back to the food, which was the point of the visit. The menu at the piggy is not complicated. My sister ordered the cheese dumplings with a dollop of garlic pesto sauce. I ordered the chargrilled burger with Roquefort cheese, which came with shoestring fries. And the best part about the order? You can have your burger grilled exactly the way you like it - which immediately made me think the meat is ground right in the kitchen.
I ordered my burger medium rare. The result was an incredibly juicy, cheesy delicious burger that pretty much justified it's status as a iconic New York burger, and it was one of the best I've tasted in a long, long time. My dinner companion’s cheese dumplings were soft, almost pillow-like in texture, and the flavour of the pesto-garlic sauce was so subtle, it just added a natural rustic flavour to the dish. My sister has an aversion to garlic, and is very quick to notice it in dishes. But she couldn't with this dish and I concurred. Fantastic.
A hungry man has also noted his appetite for desserts numerous times on this blog, so I wasn't about to pass up on the crème caramel on offer at the pig. This is a classic French dessert, and is also tricky when it comes to making this dessert en masse. Why? Because it's often reliant on the right room and oven temperature, making sure the creamy custard flan isn't too thick or thin, it should ‘wobble’ when it’s shaken. The caramel should be saucy but not runny, and especially not burnt which can obviously ruin the flavour. None of these worries were a consideration. The dessert was light, 'eggy' , fluffy, and yes, ‘wobbly’ – basically, the perfect consistency. The caramel was not too sweet or too runny, and more importantly, not burnt.
We could have stayed all night. It was lovely sitting at our table, enjoying drinks and watching the crowds as the late afternoon light turned to dark and the staff began to light candles in the very busy pub. The meal and service at the piggy was just the perfect start to a New York culinary journey.
Although we were very lucky to snag a table so quickly, it is probably best to try to reserve a spot should you decide you wish to check out the piggy. It's definitely worth the trek and who knows, maybe you'll run into someone on your way in and think "Hey, was that Bill Clinton?"
The Spotted Pig, West Village› 314 W 11th St, New York, NY 10014
The odyssey continues with Part 2 - coming up next.
said Steve at 1:17 PM