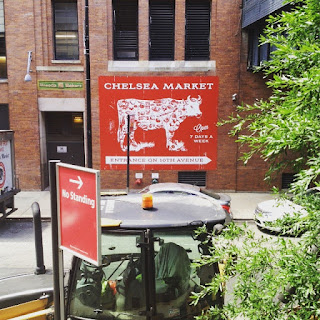 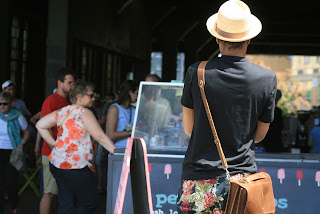 All images courtesy of Stephen Wilson and Marcia Wilson
I left a bit of a cliffhanger with my last post (read it here). There was a reason for that and you'll soon find out as you read on.
You see, I was left heartbroken and bereft when I left New York, and that's because I fell in love. Hard. This was a love that shook me to the core of my appetite and stomach. It was out of the blue that this thunderbolt of love hit me, and I’m still reverberates a week later. I am still trying to catch my breath in disbelief that it happened so fast, so quickly. It is for this reason, that I've dedicated an entire post to the amazing, delicious, so worth the forty-minute wait and huge lineups. Yes Shake Shack, I'm writing a message of love to you.
The story of a 'Shack' love begins now.
It was on my last day in the city, and it could be described as an ordinary New York day. We planned a visit to Chelsea Market and then we were to head back to the hotel, pack up and leave for Toronto. I should make a quick diversion here and describe Chelsea Market and The High Line, as both are fantastic 'must-sees' when you're in New York. Take a note wussy councillors in Toronto. Want to do something about the hideous Gardiner expressway? Turn it into a pedestrian friendly, gorgeous tree and plant-covered walkway for residents and tourists and they will eat it up.
The High line has been a huge success since it opened to the public in 2009. A former elevated rail line running along the west side of Manhattan, and now converted to a pedestrian walkway, it was absolutely rammed with people when my sister and I arrived. The landscaping and work that went into the redesign of this once polluted highway, is indeed an impressive feat. It is also testament to the dedication of civic-minded people, all of whom were determined to turn something that was strictly meant for trains, into something actually useful and healthy for the city. Now, New York has completely survived without this once important transportation route, and Toronto would too if something radical is achieved with the Gardiner. But I digress.
The High Line takes you to Chelsea Market, and what else is there to add that hasn't already been said about a fantastic food hall, shopping mall, office building, television production facility and the home of the Food Network? It is a gorgeous, reclaimed industrial building with an impressive array of specialty food, wine and desserts. You can spend hours in there, or maybe just hang around to see if you catch a glimpse of a favourite Food Network personality. I'm sure that's a rarity, but while you stalk - I mean search, take the time to browse, partake in the free food samples or do the next best thing: people watch. 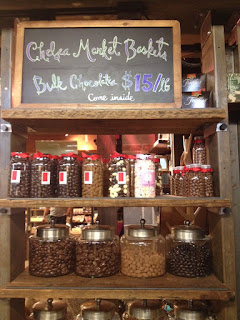 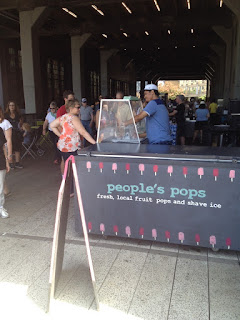 But the visit was over, and it was time to head back to the hotel. I thought to myself that maybe I should have grabbed lunch at the market, but honestly, I knew that a market meal wasn't going to happen. My mind was set. It was definitely time to take look at Shake Shack. After all, it was right around the corner from the hotel. Why not grab a burger to go and eat as I pack up. But more importantly, it was just time to find out what was all the fuss about. I was about to be given a thorough, delicious reason as to why there was such a fuss about the place.
I was fascinated the minute I set eyes on it. Prior to my visit and just walking past it, I recall being stunned at the lineups that began at lunchtime, and lasted until closing time. Tourists and residents alike stood -patiently I might add, for hours. People took pictures. People, whom I'm sure will never set eyes on each other again were instantly 'friends-in-a-queue', as they waited patiently for their turn to order. It was fascinating to watch.
Look, I know that we all need to curb our calories. Fried foods are a huge reason why a majority of citizens on this planet are suffering a myriad of our most serious health issues. But I'm sorry to have to make a slight digression in regards to that particular health issue. Shake Shack burger and fries are sublime. Sublime I tell you. Particularly since this is fast food. I'd eat this over any of the burger chains if I was forced to choose. The fries stay crispy for much longer than I thought, and it's crinkle cut(!). I repeat, it's crinkle cut! That means nothing to a lot of you, but to me? I love crinkle cut fries.
But what about the burger you may ask? According to the 'dinersjournal' blog, the burger is a blend of mostly brisket, with chuck and short rib mixed in. It would explain the incredible moistness of the burger. The cheeseburger I ordered had a tasty, squishy bun, lettuce, sliced Roma tomatoes, a Kraft Cheese slice - yes, not artisanal cheese here folks, but the slices you'd find in any grocery dairy aisle. It also came with a rather tasty 'special sauce', which had a tangy, sweet and sour taste. I'd definitely compare it to a tartar sauce mixed with Thousand Island dressing - not a great picture I know, but regardless of the ingredients, it hit the right flavour spot. Obviously, that's not really what the sauce is made of as it is a ahem 'secret', but it was an interesting enough flavour that really did lend itself beautifully to the burger.
I ate it in five minutes. I yelled at my sister that she must try a bite of it, but I secretly hoped she wouldn't. She declined. She knows better than to get in the way when I'm on the hunger train.
In the ongoing burger wars brewing in the States, the hamburger chain contenders revolve around In'N'Out, Five Guys and Shake Shack. I have yet to try the other two versions, but so far for me it is all about Shake Shack. It is in the forefront of my mind. It is the one I wish to write songs and poetry for. It is whom I would get down on my knees and offer a proposal. Did I not mention earlier that it was hard love?
Oh, if there was a way to bring back with me to Canada, I'd never let you go. Would you say that a hungry man has lost it? Maybe. But I'm telling you, this place is worth the ode to love.I even have a great location where it would almost guarantee some serious crowds.
Give it some thought Shake Shack. Please. Please, don't let the image of the empty Shake Shack bag below be my last thought and impression of you. I know that the city - ok, maybe just me, would be ever so happy/grateful/forever in love with your presence. Think about it.
In the meantime, I shall cherish the burger memories and the picture below, as a reminder of good things to potentially come. 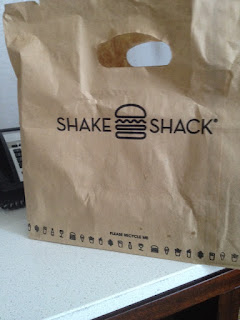