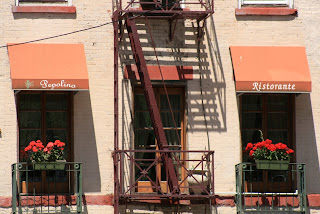 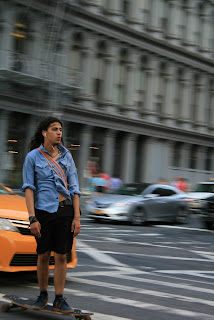 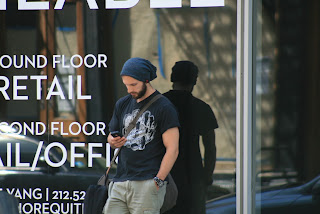 images courtesy of Marcia Wilson
New York is, in general, a crazy cornucopia of vehicles, pedestrians, noise, hustle and bustle during the day. But the city truly comes alive at night. And so, on our last night in the city, my sister and I set out to enjoy a final evening meal in the greatest city on earth.
Dinner on Saturday night was a pre-planned birthday celebration for my sister. Bookings were made at Balthazar, and we were scheduled to head off to the iconic restaurant for an early dinner. But then Saturday afternoon happened in SoHo.
It really was a beautiful afternoon - not too hot, lovely breeze to cool off from the beating sun. It was a perfect day to wander around Manhattan. And as the time progressed, I knew we'd never make that dinner. The reservation was for 6 pm. I called and cancelled.
My sister thought that I'd be disappointed about missing Balthazar, but truth be told, it was fine, mostly because it's New York, and I've mentioned before there are so many places you can stumble upon. Which is how we ended up at Doppio Artisan Bistro in the West Village. 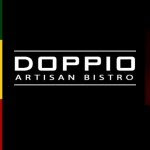 image courtesy of www.doppionyc.com
We had walked by the restaurant on our way to The Spotted Pig the previous evening, and it just looked comfortable, non-pretentious and the best part? There was plenty of outdoor seating. Our Saturday night dining adventure began as one of those quintessential warm, breezy New York evenings that require al fresco dining. Doppio fit the bill. No reservations were needed, but that policy may not be true for people who wish to dine earlier than we did (we didn't arrive until around 9:30).
In my research afterwards, I found out that Doppio is a chain, with additional locations in Sag Harbour and Greenwich, Connecticut. Sometimes when you hear the word ‘chain’ in the restaurant business, certain negative connotations about the food, quality and service may pop up - not to mention, in some minds, perhaps a whiff of elitism? Growth, particularly when you have developed a food service concept successfully, is a very good thing within the restaurant trade. I personally do not believe a chain is necessarily a bad thing, but it does depend on the chain itself. I usually ask myself before I visit what has the chain created and is it providing a valuable service to hungry patrons? Which brings us back to Doppio. It is renowned for its pizza. That almost satisfied a craving in me as I had hoped to partake in a giant New York slice while in the city. As it turned out, I ended up checking out the pasta instead.
I loved the look of the bistro. It was a simple design - stark, with plain wood tables and candles. It also featured exposed brick and a small, open kitchen - which was quite efficient considering how busy it was in the restaurant and how cramped it looked. But then again, the efficiency wouldn't and doesn't surprise me. I had learned, after my travels in In Viet Nam, just how amazing chefs and cooks can be with limited space and equipment. The restaurant crowd was young and fashionable, with a relaxed vibe, but that could be a result of the plethora of empty wine bottles and glasses found on a variety of tables.
Upon arrival, the host greeted us immediately. Since the patio was extremely busy, he secured us a table near the window. Inside, the restaurant was slowly winding down, but there were still plenty of patrons buzzing around, enjoying wine and what looked like very good Italian fare. As previously mentioned, the bistro is known for its pizza, but the pasta was beckoning and I somehow knew I wouldn't be disappointed with that choice.
Having reading that, I have a feeling people would wonder why I would expect to be disappointed. It comes across as rather self-defeating before I even start n'est-ce pas? The answer to that is pretty simple. Cooking pasta should be easy, and for the most part it is - after some experience and instruction on how to cook it properly. But often, in many restaurants that do not have a serious dedication to correctly cooking pasta, it isn't easy and ends up tasting like crap.
Pasta can be fickle if you don't know what you're doing. How it's made and how it's cooked is going to be different for everyone. Some people like their pasta overcooked(!) - bordering on mushy. I don't ask why, but that's just a preference for some. For me, I prefer it al dente. I like a bit of chew to the pasta, but therein lies the rub. There is a fine line between undercooked and al dente, and few restaurants manage that well. As it turned out, Doppio did manage it, and managed it very, very well.
My sister had the Pappardelle dish, with wild mushroom, fontina and truffle cream. I ordered the Linguine 'aglio olio, with shrimp and Calabrian chile. The pasta for both dishes was perfectly cooked. Perfect. My only complaint was the slight grittiness of the sauce. I wondered if the shrimp wasn't deveined?
Espresso cheesecake was shared for dessert - a nice, not too sweet note to end a long, lingering meal. As I paid the bill, I noticed I was comped on my old fashion drink. Sometimes being flirty with cute waiters can pay off. Sometimes. Regardless, Doppio is yet another spot that I would quietly recommend. Simple, yet flavourful eating, friendly staff and incredible service, combined with a warm night and prime viewing pleasure - if you manage to get a seat outside, warrants a visit should you happen to be wandering around the village.
And with the ending to that meal, it was just about time to say farewell - but not goodbye, to an amazing culinary odyssey in New York. I know I'll be back. The love for the city was quietly buried for a few years, but now it's back with a vengeance and I'll return to enjoy another New York state of mind.
Although the post says 'fini', the story is not quite over yet. Something else happened before we headed back to Toronto. Something so unexpectedly delicious, something so tasty, it immediately made me think, "Yes, so this explains why it's so incredibly popular" followed by, "Is there a way to bring this to Toronto?"
The reveal and explanations are to come in an upcoming post.
Doppio Artisan Bistro, 581 Hudson St at Bank St, New York, NY 10014 (212) 206-1444
said Steve at 1:02 PM