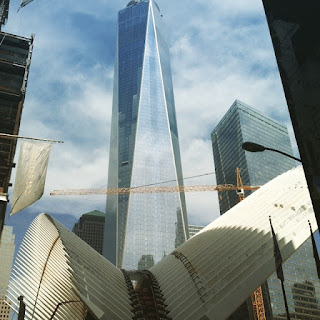 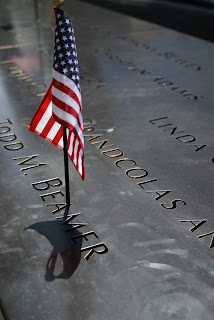 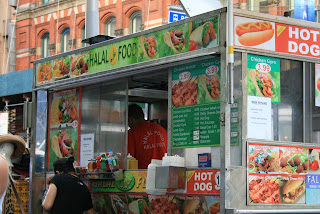 images courtesy of Stephen Wilson and Marcia Wilson
Although it has been eight years since I last set foot on the streets of New York, I have not forgotten just how much the city effects me. Back in the days of my semi-annual trips to the city, I always felt invigorated the minute I was within reach of the city limits.
Eight years later, that feeling is back with a vengeance. I missed it.
Although with trip I flew Porter, Toronto to Newark Airport, I recall flying in from Toronto to La Guardia. The airplane would sometimes fly over Manhattan, and you'd get a bird eye view of Central Park. I would get so excited every time the plane would 'surprise' the passengers with that view. It just never got old. Upon landing and leaving La Guardia, from the back seat of the taxi you'd watch that incredible Manhattan skyline get ever so close. The spectacular skyline was made even more dramatic, if you happen to arrive after a sunset hits the buildings and provides this incredible backdrop to an already impressive view. You can't help but gasp and stare in awe as you drink in the sights.
There is an energy that just blankets this city, and you'd suck up every drop of it. It's what keeps you going after seven straight hours of shopping. It's what gets you moving as dawn turns to dusk, and you start to head home only to get ready for an evening out again. It's what makes New York the greatest city on the planet.
Now I have previously babbled incessantly about Tokyo, how it also crackles with energy. But no other city makes me smile with pleasure like New York. If it ever happens - in some way, shape or form, the possibility of moving here would never be turned down. Of course, reality tells me that would really mean living in Yonkers, or Staten Island, because there is no way that I'd be able to afford Manhattan. But one can dream.
And speaking of dreams, a hungry man woke up from a rather comfy rest, to fulfill his waking dream of eating his way through Manhattan. The second day of the food odyssey continues.
New York is capital 'C', crazy when it comes to food. Too many choices plus not enough time can equal head spinning confusion. That is why I usually like to pre-plan visiting certain places, just to make sure I don't get distracted or worse, stuck in "where do I eat?" decision hell. Of course, it's totally recommended by a hungry man to take a stroll and stumble upon a place if you don't like to plan ahead. I try to do a combination of both, and since we had skipped breakfast, by the time lunchtime rolled around, we were hungry and ready for a mid afternoon meal.
We were in SoHo, the famed neighbourhood named after the term 'South of Houston (pronounced 'house-stun')' street. There were so many quaint little bistros and cafes to stop off, but quite a few were full, with many watching the FIFA World Cup. So we settled on - surprise, surprise, a pub. 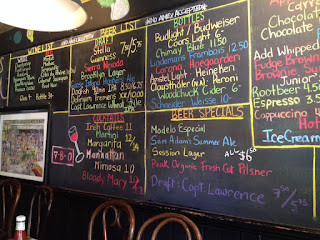 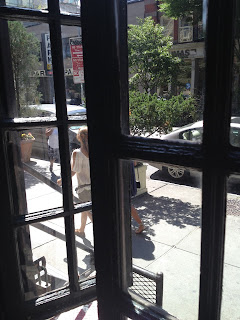 images courtesy of Stephen Wilson
Ken's Bromme Street Bar is as local as you can get when it comes to neighbourhood pubs. My sister and I were given an awesome window seat, which is absolute prime viewing real estate in any restaurant or bar/pub in SoHo. We watched (and took the occasional picture) the crowds walking by the pub, while noshing on BLT sandwiches - the old school, née 'bad' version. You know what I'm talking about. No artisanal cheese here, this was the processed cheese version(!), tomato and very crisp bacon on fresh rye bread with chips. Trust me, this is as non pretentious as you can possibly get but the beer is cold, the food is pretty good and it will give you that extra energy you need as you continue to shop and explore the city.
As the odyssey continues, I do have a fun NYC story to share.
As the shopping day continued, my sister was battling crowds in a department store and I decided I'd wait outside for her. I grabbed a bottle of water from a food truck outside the store and waited for her. All of sudden I hear "Hey, Mister". My first thought, was "Oh God, should I even bother to look?" Turns out it was the same food truck vendor I bought the water from. He was leaning outside his truck window and calling for me. So I went over to him, and he asks if I'd mind watching his truck while he pops down the street to run an errand. Honestly, what can you do. I took it as a badge of honour that this total stranger trusts a total stranger to watch his livelihood. So I said yes, and that's how this picture came about. 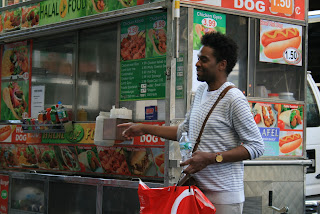 image courtesy of Marcia Wilson
My sister just happened to catch me in the process of giving information to a potential customer, and pointing to the missing vendor (whom just happened to be right down the street). Next thing you know, there's the shot and history is made. Ah New York and it's people. That's what I love the most about the city - you will always come away with a unique New York story. It's never, ever boring.
Kenn's Broome Street Bar 363 W Broadway New York, NY 10013
Next: The Finale - A Gotham Odyssey.
Read Part 1 of a Gotham Odyssey here
said Steve at 1:44 PM