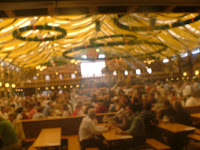 Alright I admit I'm not being entirely original with a portion of the headline for this post. Go to any blog where people have written about Oktoberfest and you'll see 'Ein Prosit' somewhere in there, be it in the headline or the post itself. The actual full version is 'Ein prosit, ein prosit der Gemutlichkeit' (click on the words to hear the song) where you lift your huge Maßkrug or Maß (beer stein) and sing along.
It is sung endlessly at every tent, and you'll be sick of it like I was after three days of hearing it (sidebar: I find at Oktoberfest - and all you regular visitors to Munich/Oktoberfest tell me if I'm wrong, but one reaches a point where if you're forced to hoist your beer in the air one more time singing that song, you're just begging to hurt someone so you can drink the damn thing in peace!)
But I digress. If you also happen to stumble upon other blogs about Oktoberfest, you'll find loads of descriptions about the festival; what to see, what to do, where to go etc. so I'll spare you those details in this post.

So after spending five days in Munich, Germany, three of which were at what is by far the biggest beer-drinking festival in the world, literally filled to overcapacity with some seriously drunk people, I came home with a question: how the hell do these people pull this event off without serious incident*? *(there are some incidents, it is NOT perfect). 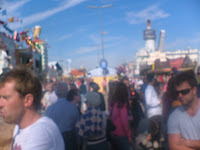 I mean c'mon - in the city where I'm currently living 60 people can't even go to a bar without a fight breaking out yet somehow 6 million people can happily manage to drink beer in lederhosen without embarrassment and still avoid the same stupidity that happens here at home? Makes you wonder if there is something in Canadian beer that makes people (BOTH sexes) act so violently when they go out or if Germans are just conditioned to handle their beer intake better in public (he says while not one paragraph above he's advocating violence over singing Ein prosit!) Anyway, if you can scrounge together the cash and the time to attend, then you should definitely do it – it's so worth it. It is just so huge and over the top, fun and absolute madness. Organized chaos if you really think about it. If that's your thing you'll love it. If you have issues with personal space don't go. Trust me, there is no such thing as personal space at Oktoberfest. I should also mention that Canada has a version of Oktoberfest held in Kitchener/Waterloo. I've been asked/told to go check it out but why would I now? If someone provides me with a convincing reason as to why I should go to Oktoberfest lite instead of the real thing than by all means write to me ok? And if you do, please refrain from using the words 'local' and/or 'cheaper'!