So what do you do at Wiesn? You drink beer. A lot. I happily partook in the custom and luckily I didn't get sick (I did, however, witness a few incredibly gross occasions of that including one that was WAY too close for comfort - huge shout out of thanks/Danke schön to Mark and Sonja for the 'protection'). Oh and I wore lederhosen. Pictures may or may not appear, I haven't decided on that yet (truth be told, I still have to find a job when I return from my travels and the internet, being what it is where everything private is public, I really don't wish to be judged/laughed at before I meet a potential employer ya know)? Anyway it wasn't all about the booze. I did manage to eat something amongst the partying.

I'm making this clear. This particularly trip was NOT meant to be a culinary jour 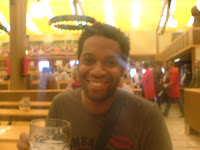 ney. My diet was kept in line to what I was doing there, which again was mainly drinking beer. So really this post should be called A Drinking Man Travels! But when I did eat, my meals consisted of food that mostly leant itself as the right pairing to beer including some damn good rotisserie chicken (please don't even think Swiss Chalet - if you are, banish the thought immediately!!!!) If you're going to eat at Oktoberfest, the majority of the tents serve that crispy, delicious chicken among other things including; Weisswurst or white sausages (in hindsight I really wished I had the chance to taste the sausage but admittedly I found it very difficult getting past the somewhat stomach shrinking all-white appearance of the sausage), pretzels (brezen), Schweinehaxe or crispy ham hocks and german potato salad, all of which can be happily found in Canada's food guide on how to eat healthily (ahem). I managed to eat a somewhat tasty pork dish with a marsala sauce but it was also covered with bacon (now I LOVE bacon but pork on top of pork?) mushrooms and peas. Are you salivating? No? Don't blame you but it was pretty tasty even if the description may produce the opposite effect.

I'm hoping when I return to Germany later in the year I'll have more of an opportunity to experience some fantastic German cuisine that won't need to be enhanced by a pairing with beer but than again maybe that is what German cuisine is all about or at least a big part of it. I look forward to learning more firsthand!

Final Post: The 'joy' and pain of airline food