Scamming – let me count the ways..

The joys and pitfalls of travelling solo. Man alive it's VERY hard always having to watch out for yourself ya know? I know, I know, yes there are people who are going to prey on you like wolves on a carcass whether you're alone or in groups. I also know that just because Im talking about it based on where I am, Viet Nam is not the only place in the world where you can get scammed or cheated or somehow hoodwinked into giving up something. Hell in Canada they may be a bit more sophisticated about it but it happens there too- phishing anyone?? Anyway the question is, has it happened to me? Sure – I think. It happened in a cab when I was hanging out with Robert (not to be confused with my Robbie) back in Saigon. I remember it clearly. We had just finished the boat ride and we were looking for a taxi. We found one, the driver gave us a quote and we got in. I noticed Robert looking concerned but I just assumed that was for something else so I settled back and we puttered along. This is what happened:

Rob, in a low voice: "We should have gotten in that other cab".

Me, already suffering the strains of rumbling sick tummy and was quietly rubbing it, hoping to keep back what was sure to come up – sorry - says back to him: "What other cab? Really, why?"

Rob: "Do you not read Lonely Planet? You should always use so and so cab company and not no-name cabs when you're in Saigon. We're using a no-name cab".

Me: "Oh, I didn't know that, and no I do not read Lonely Planet. It's not because I don't want to or anything I just didn't think what they said applied to me ya know because, well, I'm not a student nor backpacking right? So yeah, lonely planet, not so much (cue rumbling stomach)."

Rob: "umm yeah (add to that statement with a look of whatever Steve haha), well anyway we're going to get screwed here".

Sidebar: why do people say that when it inevitably leads to something not so great happening?

So when we get to our destination which was a total of five minutes, no joke, and the guy did quote before we got in the car that the trip would be about a dollar American (vendors always quote US dollars here - remember that if you come). Oh and another sidebar: NEVER EVER show that you have large sums of money on your person; I mean that's common sense anywhere you go but here? If you have to count it, do so discretely so no one can see. You'd be surprised at how fast the fare/costs/prices whatever can change. Anyway Robert starts counting the money (not quite as discretely as it could have been) he has in Vietnamese dong and the driver , who turns around to watch us totally starts freaking out. Gesturing and pointing at Rob and me saying he didn't want that money that Rob had (has was counting out a ton of small change) but I had one 100 000 dong in my hand. He actually yanked it out of my hand and then got out of the car and kicked us out and took off. So he basically got about 5 bucks Canadian – a four dollar profit – maybe less in US dollars. Not a big deal , to me anyway. I mean it's not a wonderful feeling either but I wasn't going to have a breakdown on the street because he took it. These things happen. It was one of the most bizarre situation I ve been in since I started traveling and added to my already less than happy state of mind for Ho Chi Minh/Saigon. Robert turns to me smiling and goes as the taxi drove away "we've been scammed". I'm like: "Really? Sad. Ok now let's find somewhere where I can use the washroom" (rumbling tummy, remember??).

In the grand scheme of things, events like that will happen. And I wasn't alone when it did which makes me laugh even more! I think things like that happen to me when I'm with someone. I let my guard down. So I'm more vigilant when I'm alone right? HA!! Ha Noi quickly put that notion to bed.

As I walked on the streets of Ha Noi, shopping, minding my own business, apparently my shoes looked like hell and holy God these shoe cleaner guys were soooooo persistent and I can usually shake that stuff off (I was actually called mean earlier because I wouldn't buy postcards – and THEY were really persistent too) but I just was in such a great mood so I stopped and had them cleaned because, let's be honest here, they really did need to be cleaned. Ya know, despite it being known as a scam (actually I didn't know that - maybe I should read Lonely planet eh??), they did a fantastic job. They fixed the heel, really cleaned the shoes (they were suede) so they look like new. I was very impressed so I'm thinking ok where is the scam in this? Oh, yeah - the price. The guys, there were two, wanted 200 000 dong EACH (or about 40 dollars total). Oh and as incentive they also offered first to get me girls, then boys, and then they offered themselves for extra - holy shit eh? I laughed I mean c'mon right? I gave them 50 000 dong. It was all I had. They weren't happy – at all. Oh well, my shoes looked great! 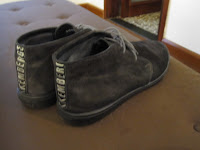 Yeah, I know it's hard to tell. Dirk Bikkembergs shoes usually look like this - sort of worn out. I kinda wish I had a before and after shot but just trust me, they did a great job! I felt a bit bad about what I gave them but dammit it's a hard world people – sink or swim J So was I scammed. Maybe? I don't feel like I was. I'll have to ask the Vietnamese staff here at the hotel to double-check on that. No doubt they'll look at me and say oh hell ya you were! 'Tis ok – nothing was stolen or anything so I'm not gonna cry - I'm gonna strut in my clean shoes!!!
I will add this: if this does happen to you,don't be a me - stick to your guns and say no!! Even if you have to yell it. It's just another way to get at your tourist dollars. Be firm. Advice I will take myself (again).

Update: Ok so I've gone online about scamming in the area and it seems that Taxis are the biggest scams going in Ha Noi, but overall the stories aren't good about things that have happened to some tourists here. It's sad ya know? I mean all you want to do is just enjoy yourself, visiting a place you've never been trying to soak up the local culture and what do you end up doing? Spend (wasted) time determining whether or not you're going to get the best value for your money or always having to keep an eye on your damn wallet so you're not being taken in some form or fashion!! Draining. Ah well again the joys and pains of travel! Watch your back!