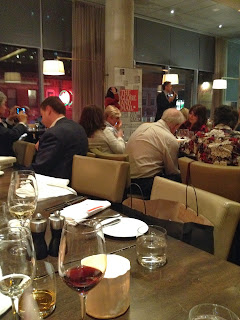 Ok yes, admittedly that is a very bad post heading, with just a wink and serious copywrite theft to dancing with the stars. I'm sorry for that, but I couldn't think of anything else for the heading. It's true though, that I really did eat and drink tonight with two of Canada's most famous culinary and wine experts, Lucy Waverman and Beppi Crosariol. The twosome, who also write columns for the Globe and Mail, have just released a cookbook entitled The Flavour Principle. A few fans, including myself and good friend Tracy T., were willing to pay for their company and expertise tonight at Luma restaurant in Toronto.
Now admittedly, I came to hear and see Lucy Waverman. I was not disappointed. She is incredibly knowledgable about food -as she should be being one of Canada's top culinary voices. I loved hearing her talk about some of the inspiring places for flavours (Senegal!), the countries influencing current culinary trends (Brazil, Argentina, Chile!) and her politely criticizing one of the recipes from the cookbook that the guests had a chance to sample tonight. She made a point to say that perhaps the cardamon cake shouldn't have been made en-masse. My thought at the time? Yikes to the pastry chef at Luma! Now to be fair to Ms. Waverman, she didn't direct the comment to the pastry chef or whoever was responsible for making the cake, but the point was made. I loved every minute of it, and it was truly an honour to finally meet the woman behind the words and recipes.
Now I would like someone to explain to me how it is, that I ended up listening to a wine expert accurately quote 'lil wayne to describe Moscato? Yes folks, that was Beppi Crosariol, and as a result of his 'rap', I'm a fan of Beppi's for life! God, I wished I had videotaped it. I mean c'mon, this event was filled with a mostly white, mostly older crowd and we have one of the country's top wine experts quoting a rap song while talking about wine? Awesome and brilliant!!!
I could sit and listen to both of them talk for hours about food and liquor, completely absorbed. Who wouldn't be (he asks rhetorically) when the topic is all about flavours, and the best way to pair those flavours with wines, spirits and/or beer. It was everything I hoped for, and for 175 bucks a pop, thank God it was worth the price! Mind you, we did get some decent swag out of it, and all kitchen related too, hooray!!! I'm serious when I say "hooray" people. I love getting new kitchen toys, and I had banned myself for a year from getting anything new. So I nearly passed out when the gifts included a new grater, an ultra-modern lemon reamer, and of course the cookbook.
Now I've reminded myself and readers of this blog, that I do not represent any of the brands or people I mention on here. With that said, I can praise The Flavour Principle cookbook, because it truly represent a cross section of recipes that just about anyone can attempt to make. Ms. Waverman and Mr. Crosariol marry a cross section of flavours in the book, that maybe ten years ago would have been considered exotic, but are so commonplace today. It just shows just how much things have changed - for the better, regarding the Canadian palate. This is so exciting for chefs, home cooks, and people who just love food. The recipes are simple and the reason is clear: some of the very best dishes found the world over began as very simple recipes. The Flavour Principle is a good reminder that cooking and drinking never has to be complicated to be good.
said Steve at 12:20 AM