Put some South in your Mouth! Talking Southern Cuisine 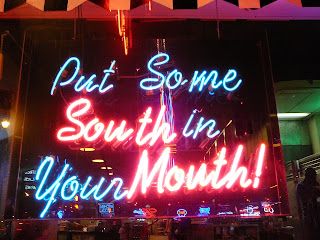 image courtesy of www.salvationsisters.com
Put some South in your mouth. What a great slogan by the fabulous Salvation Sisters and a pretty accurate description of my culinary adventures in Memphis. I was more than willing and very happy to put plenty of South in Mouth thank you very much.
On the flight home to Toronto, I was thinking, smiling and even frowning, about my time in Memphis. My experiences with the city, the cuisine, the people - all events had a healthy dose of yin and yang moments. Now that I really think about it, that may have been the only 'healthy' moment I had while at the conference.
Wait, that's not true. I did have a lightly seasoned baked salmon dish, with asparagus and wild rice as my goodbye, so long, auf Wiedersehen, see ya later dinner at McEwens with Boris, a fellow conference attendee and friend. I'd say that was pretty healthy. Very nice restaurant too. I was even asked for ID when I ordered a martini. The waitress thought I was under 21! Do you have any idea what that does to the mind and body of a 40 year old? You'd better believe that made the meal so much tastier.
Back to the point of this post. I can write this next paragraph with conviction. I do not believe I could, nor ever will, get tired of Southern cuisine now that I've been firmly introduced to it. I do, however, believe that there would definitely be moments where I'm sure I'd rather be inhaling a bag of raw spinach instead of eating another piece of fried chicken, just to keep my body from turning into a play dough.
Speaking of fried chicken, my mouth waters just thinking about it. Now I'm very aware, that just like BBQ and Football, fried chicken is a deeply serious issue in the South. What restaurant, chain, independent food hut, or person makes the best version of it? Who has the best recipe? Yes, this is a serious enough topic to actually start arguments and possibly fistfights.
I was told to check out Gus's in downtown Memphis for a taste of good, Southern fried chicken. What's interesting is that it's a chain, but apparently that's ok when it comes to Gus's. My order came with sides of dark molasses baked beans and zingy cole slow. God the chicken was so crispy good. There is absolutely no point eating that chicken with a knife and fork. You grab that crackling seasoned chicken skin and meat with your hands and shove it your mouth. This is not the time to be dainty. 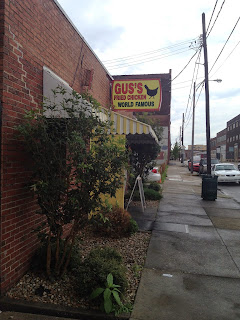 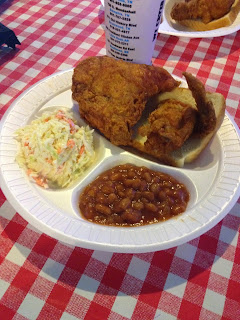 images courtesy of Stephen Wilson
But the best thing I found about Gus's wasn't the chicken, but instead it was all about the most flavourful, delicious, buttery-warm, coconut pie I've ever had. My awesome dining partner Jen found the recipe, and I fully intend to see if I can recreate it Canadian-style. Or maybe I'll just leave it in the style it was meant to be made in.
The culinary tour continued with a visit to Stax Soul Music Musuem, where I also got a good glimpse of the neighbourhoods outside the downtown core of Memphis. There is such a defiant mixture of extremes in this city. From beautiful, to an absolute shambles, it was all there for the naked eye to see. But once we arrived at the museum, breathed in the soul music blaring from the sound system, and watched Isaac Hayes epic, tricked out cadillac spin around in its display booth (Check it out here!!), it was all about 'A Taste of Memphis'.
Local Memphis Chefs including Erling Jensen, Patrick and Deni Reilly, Felicia Willet, Jose Gutierrez, Ryan Trimm and Frank and Eric Vernon provided samples of braised quail; open shrimp sandwiches, BBQ pulled pork, ribs and spaghetti (with BBQ sauce instead of Tomato); sweet potato pie and pecan bread pudding, and; tasty Southern rum with watermelon juice to name just a few of the goodies we ate. Seriously, the sample list was just what I could remember, I lost count of how many vendors and food there was. I didn't sleep well that night, my stomach was not happy I overstuffed myself at the event.
I also had the most beautifully designed, incredibly tasty chocolate from self-taught Memphis chocolatier, Chef Philip Ashley Rix. Remember that name - he is going to blow up! I've received cookbooks and recipes (Big thanks and hugs to Miss Cheryl Malik and Miss Regina Charboneau - whose personal stories are as good as her recipes!) that I can't wait start now that I'm back in my own kitchen.
I swear I've never been to such an incredible conference in my life. Food, writing about food, talking about it with people who love food every bit as much as you do? Sampling a range of outstanding (and also a few cases of middling to not-so- great) cuisine? A dream come true and there's more to come. Think your stomach can handle it?
The conclusion will be posted tomorrow.
said Steve at 11:50 AM